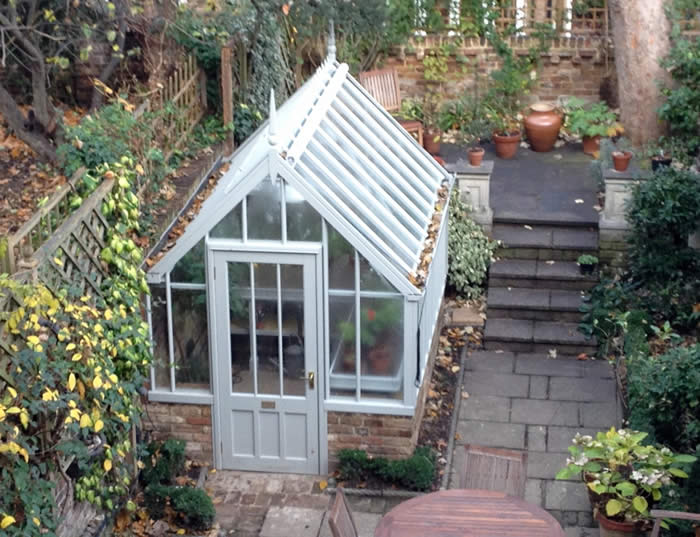 Our little greenhouse looks very romantic this morning, half-covered in big yellow walnut leaves. I’ll go and dig it out in a minute.

It’s been in place for three weeks now and I still keep going outside (or at least looking out of the window) to admire it. Nothing could look more at home in this Victorian garden of a Victorian house than this prim, spiky little construction, pale grey, with its finials and spiny ridge. I managed to preserve the old box hedge round the bed it occupies, so it looks totally bedded in. The main axial garden path passes it, then climbs five steps to a half-concealed terrace. At a glance you might think another whole garden lies just beyond it….

Alitex have done a good job. It’s only when you open the door that you realise it is aluminium, not timber, but it still feels solid, and the door shuts with a good deep thunk. Benches take up the path side and the end, leaving the grey brick wall free for, at present, standard purple-flowered solanum rantonnei and fuchsia boliviana in pots.

The end bench will be partly occupied by a potting “shoe” (I didn’t know they were called that) when I can find or make one the right size.

The benches are covered (or rather filled) with Hydroleca: little balls of heat-expanded clay. In the past I have used sand, but the makers claim magical properties for this product. It will apparently store and release moisture precisely as needed, is lightweight and hygienic …. . the balls are rather big, though, for some of my tiny pots, at present mainly of bulbs, so they topple over. I’ll get used to it. The long side wall opens as one light operated by a splendidly retro lever. The top light opposite opens automatically at a given temperature. Under the end bench is a reservoir, filled from the gutters, with a hand pump: I’m not sure how to prevent the water from going stagnant and smelling, but I’m sure there’s a product for this, too.

At this time of year the merest spot of colour shines like a light. There is a red light shining at me now; Salvia van Houttei; only one. A moral tussle: do I go over the road to Rassells Nursery and fill my benches with ready-made colour? Just now it would be cyclamen (pretty shrill colours), primulas (ditto) or pansies. Or do I treasure the little I have – until the bulbs come out?