It was warm enough at breakfast time to leave the French windows of the kitchen open, and the scent flooding in was enough to put me off my yoghurt. The combination of daphne and sarcococca is almost a cliché of front gardens around here, ambushing you in waves as you walk by. There are two daphnes contributing to my breakfast ordeal: D. odorata, which at present has more flowers than leaves, and a D. bholua that arrived in a tiny pot, a seedling from the garden on Isola Madre in Lake Maggiore. She is seven feet high now, and challenging our little winter-flowering cherry, which I planted in its pot to keep it small enough 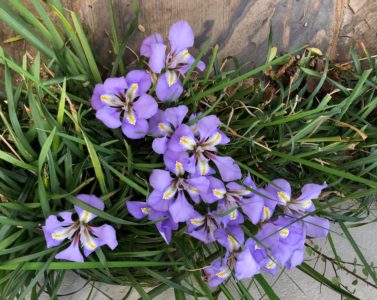 Iris unguicularis; not quite mauve….

. Apart from one cheeky root escaping by climbing over its rim (the effect quickly became obvious in lusty new shots above) the bonsai experiment has worked well.

While the back garden is almost excessively pink at present the front is near monochrome in mauve, though Tommy crocuses don’t quite match the colour of Iris unguicularis. The spot of scarlet in ours and many gardens in the street is the fruit of the doorstep plant, Nandina domestica. I’ve chronicled ours (many times, I fear) and its journey from the botanic garden in Kobe, as the seed of an unusual white-berried plant, to its routine red in England. The folklore about this odd (very odd) berberis with the air of a bamboo is the usual stuff about good luck, and in this case hospitality. What happens to Japanese houses – and their guests – where there is no Nanten by the door, (they are rare), I hate to think. It shouldn’t be this warm in mid-February, though.