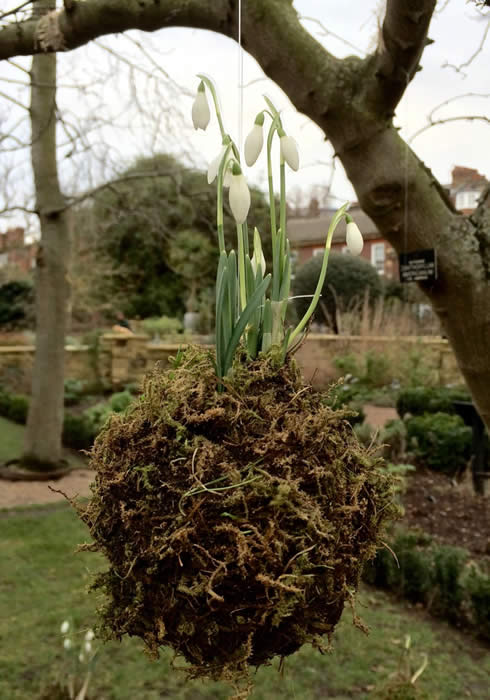 To the Chelsea Physic Garden on the first of its two Snowdrop Weekends. Nippy at 4’C with a north wind. A marvellous coup de théatre on the way in: snowdrops as mobiles hanging from trees in little balls of moss; snowdrops as a rug round the cold feet of Sir John Soane in marble, and snowdrops in drifts along a newly-created path winding through the trees down by the Embankment.

The CPG keeps getting better – and even apparently bigger, as more little gardens and gardens-within-gardens and different horticultural incidents enliven its space. It’s hard to believe that so much can happen within its four acres, including a considerable arboretum of seriously senior trees. Somehow there always seems to be another unexplored or undeveloped patch to be transformed.

Nothing could be more inspirational for an urban gardener – or any gardener with very limited space. Here is the evidence that you can pack it all in, divide your space again and again, shift the focus from one style or environment to another.

Rockery, economic plantery, perfumery, pond, bog garden, woodland garden, order beds, fernery, Antipodean collection… they merge or contrast (more of the former in winter; the latter in summer) to make a magical garden walk, absorbing hours – even on a nippy January afternoon, when galanthophiles have their moment of glory.

I love snowdrops – but that doesn’t make me a galanthophile. On the long table in the sales tent (same temperature as the garden, minus the wind-chill) patient volunteers with frozen feet were guiding us through the differences between the precious named cultivars. Most people ask about the big ones, largely selections of Galanthus elwesii with taller or shorter flower stalks, bluer or greener or broader leaves, and heaven-knows-what variations of exquisite detail in their flowers – at £25 a plant. I’m afraid I asked the obvious question: what about the undifferentiated species? ‘Yes, we had quite a few, but a French woman took the lot this morning’. They have their heads screwed on, the French.

For all the winter chill, the most eye-catching plant in the garden was, of all things, a rose; a handsome mound, seven feet high and wide, of fresh green with reddish emerging shoots and tender leaves. It carried forty or fifty pale scarlet flowers looking none (or only slightly) the worse for the frost. Rosa mutabilis? I wondered. Then I thought of ours, hunkered down and almost bare. Surely a relation? ‘Rosa odorata’, said a cold-footed volunteer. ‘We used to say Rosa chinensis Bengal Crimson, but we’re not allowed to any more.’