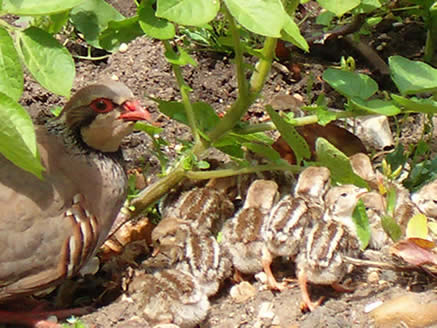 Visitors ignored the roses the other day, spurned the delphiniums, bypassed the hollyhocks and looked straight through the astroemerias. All they were interested in was the mother partridge parading her brood of fifteen chicks. Her nest was hidden just beside the greenhouse, filled with fifteen eggs perfectly broken in half, all at the same moment, it seems.

Somehow or other she manages to gather all fifteen under her body and wings for a nap, choosing an open spot with a clear field of view: the middle of the lawn or the potato patch. Why, though, do mother fowl take their chicks on route marches? The partridge is not as bad as a mallard who covers hundreds of yards in a day. No sooner is her family bobbing on one pond but she marshalls them all up and leads them the length of the garden to another, nippers falling by the way like grenadiers retreating from Moscow.

Now the partridge family has disappeared, though we can hear cheeping from deep in the Mahonia nervosa. I expect they’ll reappear tomorrow miles away – but not, I fear, anything like fifteen of them.