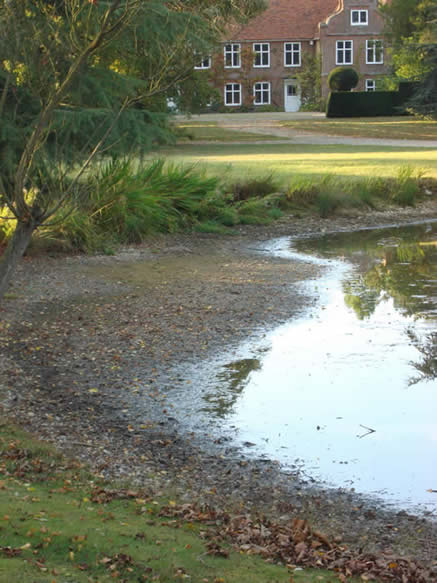 ‘When they’ve finished the duckpond, can they have the moat?’ said the voice on the telephone at midnight. I recognized the voice: a neighbouring farmer’s. ‘Haven’t you heard?’ (the standard Essex formula for breaking news) ‘the coachhouse is on fire.’ The coachhouse is 400 yards away at the other end of the village. By this time I had opened a curtain to look towards the duckpond. It was invisible for flashing blue lights. We pulled on clothes and dashed out. There were three fire engines drawn up by the water, their engines throbbing, and a tangle of fat hoses leading out of the gates and down the street. The sky at the far end was brilliant orange and full of sparks.

When we reached the coach house the roof had fallen in and waves of pale flame were attacking the gables. Five more fire engines were throwing water at it. A man on a tall ladder held the hose from the village mains supply, issuing an ineffectual dribble. The duckpond was providing full jets from the other hoses.

An hour later the flames were under control and we went back to see fish floundering, as we expected, on the bottom of an empty pond. The level was down perhaps two feet, but there was a little way to go. The moat, happily, had not been needed at all.

Why am I recalling this now? (It happened in April). Because now, after a dry summer, the duckpond is lower than we have seen it in 40 years. You can walk to the island. When you empty a long-standing reservoir (and this has been here for centuries) can you be sure it will ever fill up again?