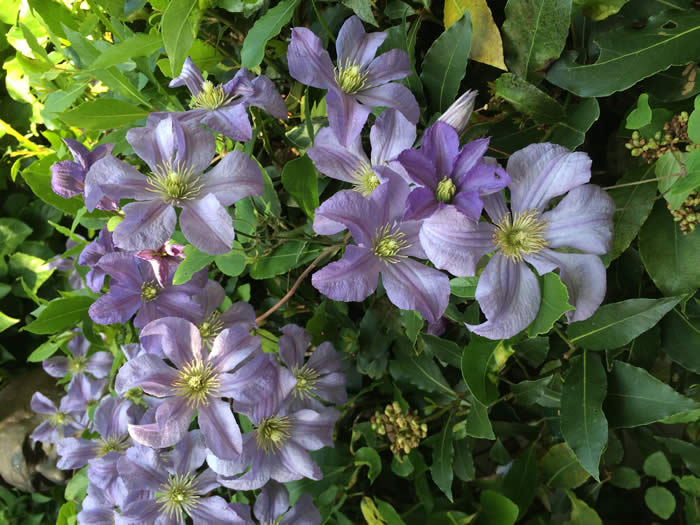 The walls are the real driver of a little London garden; you see more of their surface than the diminutive beds. Walls, and pots. I counted just now: we have sixty two planted (not including the green house). Yes, it’s intense; it needs a lot of watering, prinking, daily adjustments. But what else does a gardener want to do? Go abroad, sure. Visit other gardens. You need friendly neighbours and willing helpers. So far, so good. And we’ve learned that a happy climber is worth any number of pots.

This spring I went back to clematis. I’ve seen them in the past as the cherry on the cake; an extra touch of colour on something more structured and essential. What isn’t essential, though, in a garden you can take in at a glance? The trellises that carry the walls up another four feet are the backdrop to all the planting. Neither we nor our neighbours want transparent walls.

One trellis panel has always been bare. There is a mere scrap of bed below to plant in. A Cotoneaster horizontalis reaches up gamely above the wall, but seven feet is a fair stretch even for this marvellously accommodating plant. I’ve heard snide comments: it’s boring, vulgar, even ugly in its fishbone formation. Rubbish: it’s vigorous, designed like no other plant, bright in spring with little white flowers and in autumn with red berries. A little pruning will even make it turn corners. Something evergreen, and rapid, was what we needed to grow through it and on upwards.

Eventually I worked through the options to Clematis armandii, the Chinese evergreen that can become a matted mess if you let it. I won’t. Early progress, though, has been frustrating. Its first long shoot shot up, but not till summer and was still unripe when frost came. It perished. This year three shoots managed five or six feet in April, then stopped. When does it want to grow?

This year’s success has been a lemon-peel clematis, C. tangutica ‘Helios’. The corner by the greenhouse has been more than filled by what the vulgar might call a potato-bush, the purple-flowered Solanum rantonnettii, a cutting from our daughter’s garden in the South of France. ‘Not quite hardy in Britain’ say garden dictionaries. ‘Rampant in London’ say I. It waves slender shoots in full flower, purple on green, high above the greenhouse. Just the place, thought I, for a yellow-flowering clematis. And up she goes.

Rose ‘Bantry Bay’ is the climbing frame for the lightning-fast Clematis viticella ‘Kermesina’ – too red, perhaps to be cheek by jowel with a pink rose. Then I think of Matisse. Two more viticellas scramble with abandon up and through the tangled ivy and Hydrangea petiolaris on the right hand trellis. ‘Polish Spirit’ is a deep, almost brownish purple, hanging in swags. Two or three weeks later comes C. ‘Alba Luxurians’ with its odd white-and-green flowers (or sepals, to be pedantic).

Two other slightly larger-flowered varieties keep the season going: the peerless Perle d’Azur and Prince Charles, like a paler, slightly anaemic version. Oh, yes, and I planted C. wilsonii, like a rather late C. montana, to light up Hydrangea petiolaris on the wall before its turn comes. Finally, to complement an apricot-coloured Chaenomeles I don’t much like, the blue C. alpina. Next year I expect I’ll find room for more.