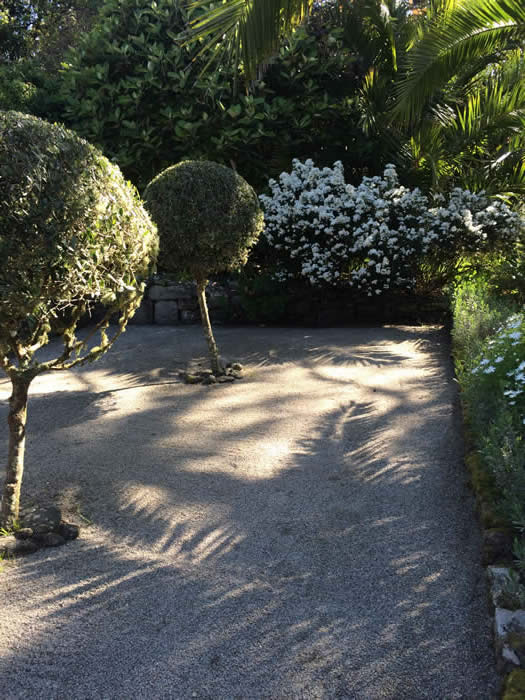 Tresco: shadows in a corner

An ambition achieved: for years I have wanted to visit the legendary island of Tresco, to see its garden of all the things we can’t quite grow anywhere else in Britain. Somehow the journey to the Scilly Isles always felt like an insuperable obstacle. Resolve arrived this spring. The ‘transfer’, as a travel agent would call it, was an entertainment in its own right: 7. 06 at Paddington, 9.45 at Exeter St David’s: an hour to visit the startingly beautiful cathedral (which by itself made the whole journey worthwhile), 11.45 take off from Exeter Airport in a Skybus Twin Otter, 12.20 land at St Mary’s and 1.15 catch a launch to Bryher.

Bryher is the nearest of the Scillies to America, England’s westernmost habitable point, a tiny island just west of Tresco. At night its rocky reefs and peaty downs are swept every half-minute by the beam from the lighthouse on Bishop Rock, the starting line for liners challenging for the Blue Riband of the Atlantic. Bryher also boasts the Hell Bay Hotel; extreme comfort roguishly named after a sailor’s death-trap, a reef-rimmed lee shore notorious for shipwrecks.

The islands were serene, the sea a glassy azure, the air cool and the sun bright when we took the five-minute boat ride to Tresco’s tiny village. No sign of the famous garden except, peeping over a low hill, tell-tale tattered tops of tall windbreak trees. Only long-serving Monterey cypresses have that ragged silhouette. Twenty minutes walk brought us to the garden gate – and another world.

We were in the horticultural equivalent of a fancy dress ball. The climate is sub-tropically benign, insulated by the Gulf Stream. It can very occasionally break down, as it did in 1987, when frost and snow destroyed all the tender plants, and in January 1990, when a hurricane felled most of the 130-year-old shelterbelt and almost all the biggest trees. The epic story of recovery from these disasters is told by the head gardener, Mike Nelhams, in Tresco Abbey Garden, a Personal and Pictorial History. I don’t often give ISBN numbers, but it’s worth it for this eye-opener: 978 185022 200 2.

I found myself floundering with many of the genera, let alone the species, of the plants in his lists. Aeonium with its varnished maroon leaves, Banksia, Beschorneria leaning lasciviously, Bomarea, Carpobrotus, Coleonema, Doryanthes, Dryandra, Fascicularia, Furcraea, Kunzia…. The impact of so many strangers at once is overwhelming. It was almost a relief, after an hour or two of wandering through such a brilliant palette, to emerge to the quiet beauty of gorse and campion and bluebells and wild garlic lining the island’s narrow lanes.

Tresco Abbey Garden, we learned, was begun in 1834 by Augustus Smith from Hertfordshire, the heir to a fortune, who leased the island from the Duchy of Cornwall and became Lord Proprietor – as his great great grandson Robert Dorrien-Smith still is today.

When the Smith family arrived they found the remains of a Benedictine abbey in the most sheltered spot on the island and built their house beside it. It remains a sequestered place, shaded by New Zealand tree ferns, while the dazzling profusion of the Mediterranean, South Africa, Australia, Mexico and Chile spreads up the hillside above in a pattern of paths and steps and pools reminiscent, in places, of its Riviera contemporary, the Hanbury Garden at La Mortola.

The Dorrien-Smith family have persevered for nearly 200 years, living on the island they rule, loyal to a marvel of horticulture which is entirely their invention, and still bursting with innovation, new ornaments and new plants.