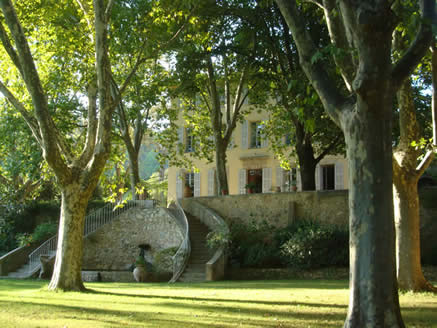 What is the absolute minimum that can constitute a totally satisfying garden? I found an answer last week in that paradisiacal part of France they call La Provence Verte, a region of pines and vines at an altitude that gives cold nights summer-long, very different from the sun-baked grey-brown garrigues of the country round.

We were staying with friends in one of those tall, almost urban-looking chateaux of the early nineteenth century, classical, well-proportioned, unornamented and a touch severe. The walls are a pale ochre, the shutters blue-grey. The garden is on two levels; that of the house and, linked to it by two stone staircases curving symmetrically round an oval bassin, a lower terrace, a simple lawn. Both terraces are surrounded by stone balustrades.

The upper terrace, the space in front of the house, is a plain unbroken expanse of that almost dust-fine gravel we don’t seem to know in England – but then we don’t play boules. It is shaded by four towering plane trees and one lime. The lawn below has four more planes, contemporary, I dare say, with the house.

The only flowers are red geraniums in tall oil jars in a row across the façade. Does the gravel sound anticlimactic? It is serene. Gardening consists of keeping it clean, dragging a sort of harrow consisting of chains over it, to efface the marks made by the boule-players. The play of light and shade do the rest.