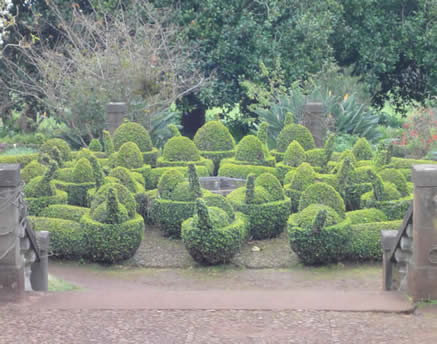 What hell, then, it must be to live and garden in Madeira, where the soil is absurdly fertile, the climate immoderately moderate, and all the decisions about what to grow are yours. That at least is how it seems on a February excursion when Essex is distinctly piano and Madeira just gearing up to bloom, with only the camellias and magnolias, plenty of azaleas, a whole lot of cherries, strelitzias, orchids, and twenty things quite beyond my ken in flower. The whole island is an invitation to garden. I’m told it’s too cool for dates or coconuts, and not great for alpines, but anything else is worth a go.

If you stay in Funchal there are two gardens, at least, that are virtually compulsory visits. The first is the destination of the glorious cable-car ride up from the seashore to Monte (the Portugese say ‘Mont’), the rather surprising final seat of the final Hapsburg emperor, the Blessed (another surprise) Karl I of Austria. The unfortunate inheritor was exiled to Madeira after the First World War and died at his villa at Monte in 1922.

The villa (which is no oil painting) now belongs to Joe Berardo, a tycoon with tastes for which eclectic is too mild a word. Its precipitous site, a forested ravine, contains a bewildering collection of plants, ponds, bridges, japaneseries, a history of Portugal in azulezos, magnificent trees and the church where the last emperor rests in peace. One would say more theme-park than garden,

Except that 20 gardeners labour to keep it ship-shape, from its sea of azaleas to its astonishing pond of coloured carp. Something for everyone.

Compulsory garden number two is a more sober affair, skilfully horticultural, quiet and private, full of wonderful things. Quinta do Palheiro has seen generations of Blandys come and go, each riding down the steep cobbled ways to the family wine lodge by the sea, where their strange brown aromatic wine sleeps the generations away.

Nothing could look more comfortable than the tall white villa among centenarian trees. Huge Canary Island pines, tulip trees, mighty gum trees rear up above lanes of magnolias in meadows of white asphodel. The wisterias were in bud, the box hedges bright green with their spring flush. There is always a worm in the bud, of course, even in such a paradise. Camellias the size of rooms were covered with flowers, but the flowers were turning brown in their prime with petal blight.

Madeira is supremely comfortable for human beings, never baking, never frosty, sprinkled year round with a reasonable ration of rain. In February last year the rain turned unreasonable. Funchal was flooded and fifty people lost their lives. Summer calls for irrigation, but irrigation is provided by the levadas (we would say ‘leets’) that thread and tunnel their way over from the rainy north side of the island. On balance humidity is the gardener’s problem. But who wouldn’t run the risk?