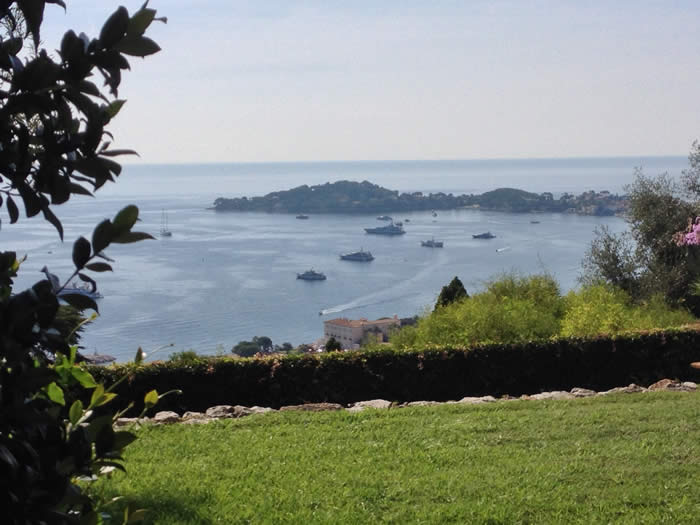 That's Cap Ferrat across the bay

A new garden diversion: spotting a muster of mega-yachts in the harbour below; the bay of Beaulieu-sur-Mer. They must be assembling for the Monaco boat show next week: Madame Gu, a bright blue boat, sharp-pointed like a dart 325 feet long, RM Elegant, the very opposite of her name, Luna (377 feet, built for Roman Abramovitch), more like a huge tug whose massive aft deck apparently conceals a submarine, and the 155 feet Blush (does the owner?)

They lend a new meaning to the word “eye-catcher” as they glide into the bay and deploy their little navies of tenders and water-toys. Meanwhile the tiny flotilla of children’s instruction dinghies is a bright flight of butterflies by the pink villa on Cap Ferrat still known as David Niven’s.

I have written before about our son-in-law’s Riviera garden. It has grown faster than I believed possible when I oversaw its design only six years ago. The vines forming a tunnel on the top terrace are heavy with grapes. The cypresses diligently clipped by Lucien and Pascale, the devoted part-time gardeners, are perfect green rockets, the orange and lemon trees thick with fruit, the cascading rosemary totally covering the stone walls, the oak-leaved hydrangeas sturdy bushes eight feet high and the agapanthus that fills the box-edged beds as thick as weeds standing upright in a stream. A persimmon tree we moved five times has its first tight globes of fruit. The climbing roses cover the pergola round the pool, and the palest blue Salvia uliginosa mixed with perovskia and deep pink Japanese anemones stands higher than my head. Iceberg (there is no better rose for a hot climate) has flowered and been cut back four times this year.

The secret is water. The micro climate here below the cliffs known as la Petite Afrique is absurdly benign. Warmth, sunshine and daily irrigation by driplines produces almost magical growth – as boar and badgers are well aware. Fencing them out is a challenge. Did Adam and Eve have this problem in their garden? We are not told. Is there a serpent? Only the crabgrass, the only grass that will grow here. Its snaking white shoots creep evilly into beds, through the stones of walls, anywhere they can reach. Now, if we could exorcise them…