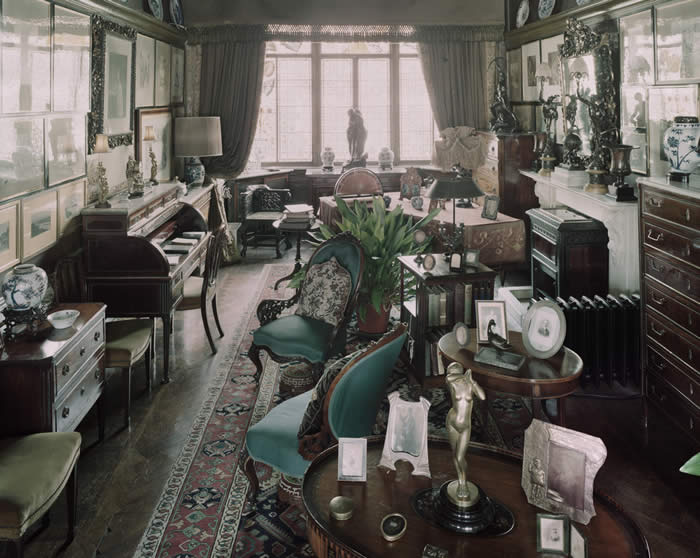 My camera couldn't cope with the low light so I borrowed this photo of the drawing room, courtesy of the Royal Borough of Kensington & Chelsea and the Sambourne family

The Royal Borough of Kensington owns and opens to visitors a terrace house in mint late-Victorian condition – a house related to the Messel family who created the garden at Nymans.

They inherited it from the principal cartoonist of Punch in his day, Edward Linley Sambourne, who succeeded Tenniel as the satirical draughtsman the whole country laughed at every week. The house was his studio, his family home and his pride and joy. He never stopped decorating and furnishing it, in a style so opposed to current ideas that it is now quite difficult to comprehend.

For a start, they seemed indifferent to light. They lived (this is the forty years or so up to the First World War) in perpetual gloom – the gloom of dark papered walls, of ceilings decorated in much the same way, of dark hangings and dark, sometimes jappaned black, furniture. No white paint: green and maroon were favourite colours. To make sure no full daylight got in, the windows were filled with stained or painted glass. Two of the main rooms had glass terrariums projecting out from the window-sills and the landing window was blocked by a water feature; a tank filled with shells and goldfish and a little fountain. Every wall is covered with framed pictures, frame to frame – most of them prints – hard to see even in a bright light, let alone the gas jets that originally lit the house.

Every surface, and lots of little tables augmented the desks and cupboards, mantelpieces, chests of drawers, the grand piano, davenports, canterburys and meubles whose names are lost in time, was an opportunity for an objet – or several. The floors were patterned linoleum or oriental rugs, the chimney-pieces stacked with shelves for more objets. And bear in mind they wore big clothes: crinolines, mantels, frock-coats – and hats. And the family shared the house, the standard London pattern of rooms off a single narrow staircase, with several servants. And every room had a coal fire to be kept stoked by the tweeny who carried the coal scuttles.

It is a fascinating place. Surprisingly there is no garden: just a yard, before the mews where the groom kept Mr Sambourne’s horse. In the afternoons he would hack out to Richmond or Hampstead for exercise. His studio, for most of his life, was just a bay window he added to the back of the house – and glazed with painted glass. On a bright day it probably sparkled, but in foggy London for six months of the year it must have gone from crepuscular to stygian.

The Nymans connection is via the Messels. Sambourne’s daughter married Leonard Messel, the creator of Nymans garden; their daughter Anne married David Armstrong-Jones (and secondly the Earl of Rosse). Her son Anthony married Princess Margaret. Their son David took his great grandfather’s name as his courtesy title until he becomes Earl of Snowdon.

Trad doesn’t usually do this Tatler stuff. But living in a house on the same model as the Sambournes, and discovering it only four streets away, I couldn’t resist conjuring up a vision of home life a hundred years ago. At least they had Nymans and its gardens to escape to.