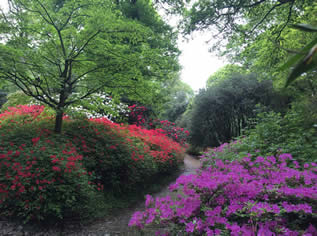 A shower at Mount Congreve

Back from a week in Ireland. ‘The magnolias are over’ everyone said. Ah, but the rhododendrons are in full cry, every leaf is fresh in the sun, and two of the most audacious gardens I have ever met were gleaming in the sunshine between the showers. Nor were the magnolias over; not by any means.

Mount Congreve is a legend – in the sense that few people used to see it. I tried to visit in the days of its creator, Ambrose Congreve, and failed. He had reached 104 before he died, still gardening, in spirit at least, in 2011. For the moment, his 80 acres of intelligent, intricate and supremely picturesque planting lives on. For how long is a delicate matter, between his trustees and the Irish Government. For the moment, what the garden needs, and richly deserves, is more visitors.

Ambrose Congreve was apparently inspired by Lionel de Rothschild at Exbury to create a woodland garden for the vast variety of rhododendrons, azaleas and magnolias. Exbury Gardens are spread over two hundred acres, gently sloping to the Beaulieu River. Mount Congreve has a mere eighty, tumbling down (almost diving off a cliff at one point) to one of Ireland’s biggest rivers, the broad, reed-fringed Suir. a few miles above Waterford.

We are used to magnolias as single specimens, sometimes groups, but rarely a forest. The Congreve way was different. He planted hundreds of seedlings of one particular M campbellii that now form a wood of pale-barked trunks perhaps 60 feet high. His style was decisive: a wall of pieris, a long ramp of one Japanese maple, another wall of an orange azalea, facing one of purple. All the colours are calculated: this is picture-making with plants on a heroic scale, and with breath-catching results. A gardener told me how Ambrose, as he called him (though possibly not to his face), rode his horse round the garden every morning, often before breakfast, then re-emerged in mid-morning, fork in hand, and worked with his gardeners all day. He was, I am told, weatherproof. No bothy for him in a shower; he gardened on.

Thomas Pakenham comes from the same hardy race, with as little restraint in planting. Meetings with Remarkable Trees was the first display of his splendid – indeed unique – tree portraits, twenty years ago. In his company, it must be said, every tree becomes remarkable, intrinsically, scientifically, whimsically, pathologically, and as a source of human stories.

Four hours of walk and talk only skimmed his collection, scattered through parkland, woods and gardens. Tullynally is a great grey Regency Gothic battleship of a house surrounded by beeches and oaks of the biggest size. Among them, then on and out into the countryside, the new collections go, many of them from Pakenham-collected seeds from China or the Himalayas. Reaching eighty seems only to have invigorated him. Half a mile from the house, magnolias form a glade, then camellias, dogwoods, tiny rhododendrons just planted out… without guards. Have rabbits gone the way of snakes in Ireland?

We only scratched the surface of both these great gardens – then went on to Ballymaloe, near Cork, for the utter indulgence of a ‘Litfest’ around the famous cooking school – and gardens. They hadn’t told me about the gardens. 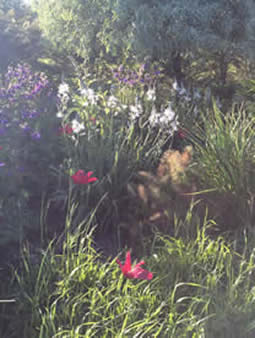