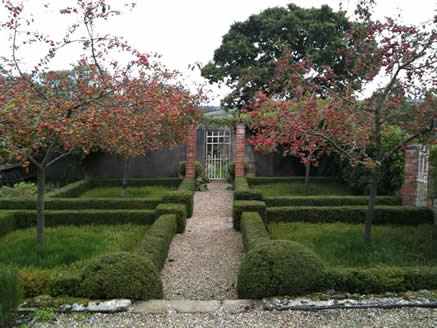 I aspire to be decisive. I am capable of drawing up a plan, arguing and agreeing with myself about, it, and even putting it into execution. But then I’ll spoil it with second and third thoughts, unneeded extras, something white to complement the blue or vice versa – and the impact is lost.
Which is why I so admire Susan Orr and her Dorset garden. It is a series of low-walled yards nestling up to the farmhouse and the barn where she keeps her horses. Perhaps they once divided sheep from pigs. Sue has used their geometry with the assurance of a Le Nôtre.

From the kitchen door your eye follows box hedges to a white iron gate, but the hedges themselves spell out more patterns to come. At each corner there is a slightly raised square, ending that run and announcing a crossroads. The pattern repeats, a series of squares with quite sober filling: the first four simply crab apples laden with fruit blushing green to red, further on sedums or artichokes.

Why does this work so well? The proportions are comely; nether mean nor grandiose. There is a powerful unity in repeated quiet green: stronger in simple shapes repeated, I think, than in the curlicues of a decorative parterre. Colours speak out clearly: the pink crab apples, the deep red sedums or the sugar-pink nerines, each in its box.
Perhaps I am drawn to it most of all as a glimpse into an orderly mind – a state of being to which I can aspire, but which will forever remain out of reach.