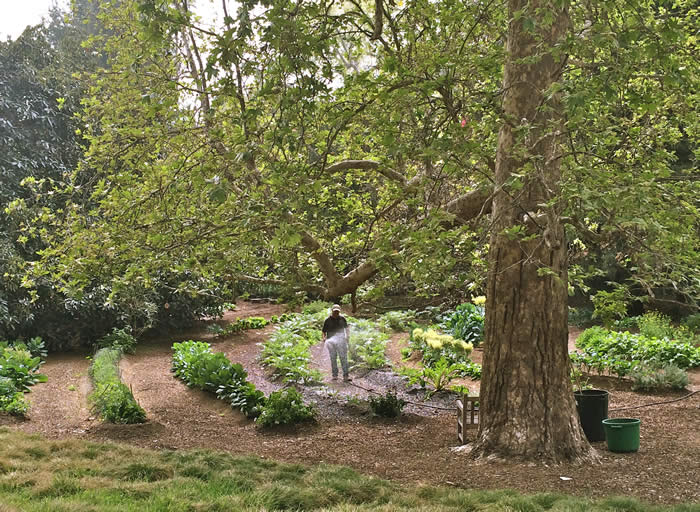 I’m writing this in the Getty Museum. Spring is taking about three days here on the coast of Southern California. I prefer our three month version, but it’s certainly exciting to sit under what’s known here as a sycamore and watch its pale velvet leaves expand before your eyes. With a tinge of regret, oddly enough: the silvery bark of the bare tree is so beautiful against the blue sky. I never saw a tree/building combination as effective as this: the sycamores, pruned back to truncheons at the end of each branch, against the white stone of these utterly modern but strangely classical buildings. I’m told that the credit for much of this; the uniformly white stone buildings and the almost obsessive number of trees, goes to the then head of Disney, the late Frank Wells.

We are staying nearby at Malibu in a garden he started 25 years ago on what was steep scrubland a mile from the Pacific. It gives me new respect for resolve, dollars – and cranes. On my previous visit, 25 years ago, I had misgivings about the 15 foot redwoods arriving with 4 foot rootballs to be planted at the improbably close spacing of a coastal redwood forest. In places, the trunks almost touched. It worked. And now they shelter an eye-opening collection of native and exotic plants, a cascade tumbling 200 feet to a lake, a creek that runs after storms, a horse ranch with Arabians, donkeys, Shetland ponies, goats, funny fluffy hens and flower and vegetable gardens, somehow disposed to feel organic parts of this manmade landscape.

The king of the native trees around Los Angeles is always the ‘sycamore’, one of the parents (with the Chennar tree of the Middle East) of the ‘London’ plane. They are paler than our planes, and apt to spread so wide in old age that they rest their white-barked elbows on the ground. The tree collection here runs from cherries and oranges and almonds to the giraffe of the palms, the immensely spindly and elegant Washingtonia. Camellias, magnolias, azaleas, roses, maples… name a desirable tree or shrub from Scotland to the Mediterranean or Hawaii and you’ll probably find it. Bauhinia purpurea or ‘Orchid Tree’, with flowers like an azalea (OK then, orchids), jacaranda, South African erithryna or ‘Coral Tree’ (not much Latin is used around here), covered in scarlet berries. Schinus molle, the drooping feathery Pepper Tree, is a beauty we could perhaps risk trying in the very south of England some day soon.

You need shelter from the sea winds here. That was part of the original purpose of the coast redwoods – and their western face can get singed brown by the salt. The steep hillside they shelter reminds me a little of La Mortola on the Riviera; paths that wind gently down in hairpin bends, bringing you close to all the planting. Everywhere you hear the cadence of the cascade and look round to catch a silvery glimpse.

The vegetable gardening is not humdrum either. The sandy soil is built up into beds here and there, formal and straight or in successive curves, in sun or shade, to grow every vegetable I could think of – except asparagus. Too specialized, says Tom, the head gardener. They grow it better on a farm along the coast.

The farmhouse is ‘Tuscan’, and startlingly realistic, with rooftiles shipped from Tuscany, an olive grove below and lemon terraces above. It could be Siena rather than Hollywood on the other side of the hills. But they have frosts in Tuscany. Here the Pacific is an air-conditioner, sending fog inland when it gets too hot. Or so they tell me.