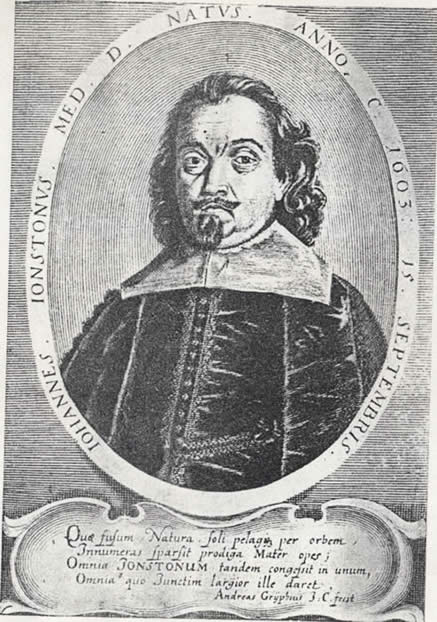 How I’d like to be able to claim descent from Jon Johnston. He was a Scottish religious refugeee, born in Poland, who became one of the great natural philosophers of his day – a day in which scholarship was a pan-European affair.

He was born of Calvinist parents, when Shakespeare was writing his tragedies. He went to school in Poland (where he learned Polish, German, Greek, Latin and Hebrew) and university in Scotland.  At St Andrews, in 1623, he studied philosophy, theology and Hebrew, then went back to Poland to teach, before setting off again to Germany, England and the Netherlands to study the closely related subjects of botany and medicine.

When he went back to Poland he became a royal tutor, taking three of his students with him on another tour, this time to Denmark, Norway, England, France, Italy and back to Leyden in the Netherlands, where  his treatise on fevers earned him the title of doctor of medicine. His next journey was to Cambridge and Oxford, then Flanders and Brabant, then Paris, Montpellier and Lyons, then Bologne and Padua.

At the age of 33 he had already visited most of the great universities of Europe. I try to imagine him lugging all his books onto lumbering coaches for another week on the road. He had made his reputation, though. Heidelberg, Leipzig and Leyden all invited him to head their medical faculties. He refused and settled in Sladwicka in the south of Poland, where he spent the rest of his life writing a series of encyclopedias, all in Latin.

I have one of them here, his Dendrographiae sive Historiae Naturalis de Arboribus et Fruticibus, published by a famous publisher and engraver, Mathias Messian, at Frankfurt in 1662.

By strange chance that was the very year that John Evelyn read his Silva, the first English treatise on trees, to the Royal Society in London – the first scientific paper in the Society’s history. Modern tree literature starts here, with two quite different books (Johnson’s a catalogue in Latin, Evelyn’s a series of essays in English) initiating the study of dendrology at the same time.

Why, I wonder, did great minds suddenly converge like this? The science has progressed, through generations of dendrographers adding layer upon layer of experience and knowledge. It has become rather a different business now, with DNA analysis to correct its errors.

But still there is a sense in which I can claim descent from J.J. We both love looking at and listing trees.