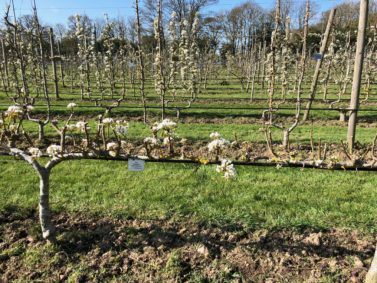 From the day he walked into a brasserie in Besancon to be a washer-up to his seriously senior status today Raymond Blanc has exuded a special sort of focussed enthusiasm. It has made his Manoir aux Quat’ Saisons, near Oxford, one of the best restaurants (and most expensive hotels) in the country. It has made him the most convincing television chef, and it powers his no-holds barred gardening. He employs twelve gardeners at Le Manoir, not because of the size of his gardens, but their intensity. In April the sight of perhaps half an acre of perfect tilth scored in immaculate straight rows (this is his veg plot) is pretty striking. Its produce, via the kitchen, is irresistible. But most impressive of all is the orchard, where more than 800 varieties of both British and French apples and pears are arranged in perfectly-pruned files round a central circle. The famous Potager du Roi at Versailles, it seems, had 400 varieties.

Blanc works in collaboration with the celebrated Delbard nursery at Malicorne, near Montlucon in the Allier, the very centre of France. Henri Delbard is famous for rose-breeding, too, having created a series of flowers matching, more or less, the palettes of Impressionist painters. His collection of historic varieties of fruit is a national reference, trained, cordoned and espaliered in wonderful ways, double and quadruple candelabras among them.

The art of pruning and ‘training’ trees is a French speciality, obsession indeed, which can have pretty ugly results. The British way, of letting a tree grow to its natural shape and size, is not at all the thing. “Elagueurs” with their saws and axes even scale tall hedge trees between fields; though here the purpose is harvesting fodder for cattle. (Cattle love elm leaves in particular). In French orchards – and here at the Manoir – pruning becomes an art of almost Japanese intensity. Apples and pears are given the same precision treatment as vines; each bud to be retained carefully chosen, the rest removed. How many pairs of secateurs does it take, I wondered, to reduce nearly a thousand fruit trees to perfect parade order?

Not only is Raymond growing them, he is testing them in the kitchen, compiling notes on the best method of preparation for each variety; whether it is best poached, roasted, steamed, baked or pureed. How many cooks?