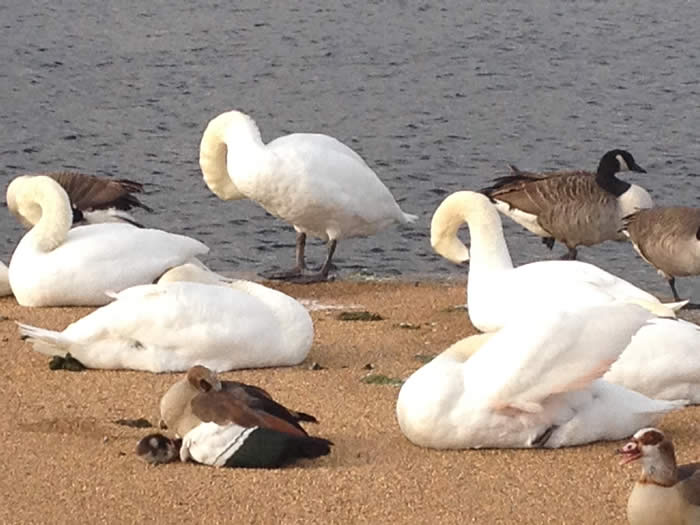 Current residents of the Round Pond

It’s something you don’t normally see in a city park, certainly not a Royal one. The grass is left uncut and the trees allowed to seed at random. Oak and sweet chestnuts and hawthorns come up haphazard in the brown grass. It’s a long way from the total control which seems to be the norm in public spaces.

Kensington Gardens, though, is run on unusual lines. The gardens were designed for the Royal family in the first decades of the 18th century, and there seems no good reason to change them now.

I like to picture the Kensington of the early 1700s, a country village with two great houses, Holland House and the rapidly growing Kensington Palace. Gardening was its main industry: the Brompton Park Nursery, roughly where the Albert Hall stands, was the country’s biggest by far (at one time it grew 10 million plants on 50 acres). One of its original founders, George London, recruited Henry Wise as his partner; together they planned and supplied the new gardens at Hampton Court, Blenheim, Castle Howard, Longleat, Chatsworth, Burghley – and Kensington Palace. William and Mary had brought in the Dutch style you still see in the sunk garden at Kensington. Everyone wanted to go Dutch. Wagon after wagon laden with trees and plants splashed along Kensington Road bound for country estates.

In due course Wise was appointed Royal gardener and drew up the scheme for Kensington Gardens in the then prevailing Franco-Dutch style (a bit of Het Loo; a bit of Versailles), with avenues radiating from the palace, or rather from the Round Pond he designed as the centre of a patte d’oie. The areas between the avenues were designated as ‘quarters’, some planted as ‘bosquets’ or shady groves, some as embroidered parterres, some as ‘wilderness’ with winding paths among shrubs and trees, some left as pasture. Altogether, they cover 275 acres. Hyde Park to the east covers 350 acres.

On the eastern boundary of Kensington Gardens you can still see two of the three ‘bastions’, looking like gun emplacements, that faced London, whether in serious or symbolic challenge I’m not sure. The succession from Henry Wise to Charles Bridgeman to William Kent, all of them involved in the gardens, is not very clear. Bridgeman (another gardener’s son) joined the Brompton Park Nursery, was promoted to Royal gardener jointly with Wise, and gets credit for the lake we call the Serpentine, made by damming the river Westbourne. Bridgeman was on the way to the unbuttoned style of Capability Brown, but he still surrounded his ‘quarters’ with hedges.

Bridgeman’s drawing of the gardens in 1733 shows the ‘quarters’ as distinct entities. Those nearer the palace, round the Round Pond (‘The Bason’) were all wiggly paths through shrubberies. North of the Palace (where the Duke of Cambridge now lands his helicopter) there were classic geometrical parterres. To the south, very much the lawns with the tree-alleys you see today. Further east, the main avenues have scarcely changed – except in the species of trees.There were open fields: the Horse Quarter, Colt Quarter, Rye Grass Quarter and Temple Quarter. Between the Round Pond and Kensington Road was the Old Pond Quarter where there was another pond (and there is now a spring).

This is the plan that is being maintained today as faithfully as possible – including the long grass and seedlings. Avenues are the trickiest part. Tree-managers are constantly faced with decisions about whether to replace old trees that fall or die or become unsafe. Should they use the same species (usually yes) or admit that a gradual change-over would be better in the long run? The Broad Walk, for example, was given an inner line of Norway maples (the outer is lime) fifty years ago. People love their early flowers and yellow autumn colour. But the squirrels love their bark and destroy the upper trunk. Squirrel control? Tell that to the tourists.

The maples will, in due course, be replaced – probably with sessile oaks. Originally lime and oak, elm and sweet chestnut were the principal trees. The planes and sadly ailing horse chestnuts are mainly Victorian planting – and thank heaven for the planes; since the elms died (there was more elm in Hyde Park) planes are by far the grandest trees. The grandest are in the main north-south avenue, with the Statue of Physical Energy at its centre, known as the Lancaster Gate Walk. There is an amusing anomaly here. When the Albert Memorial was built, in 1870, it obviously called for an avenue, but the existing one was out of alignment with it. The answer was to ‘splice’ on two new lines of trees to link with the existing ones: hence two converging avenues (and a magnificent cluster of planes) at the Memorial end. No one talks of replacing these trees: if they look tired the gardeners give them a boost, aerate their roots and spread mulch in a wide circle round their trunks.

Limes are now coming to the fore as the dominant species – at least in numbers. Last year, 50-odd new limes were planted; very noticeably in ‘The Great Bow’ round the Round Pond. They are very noticeable on Bridgeman’s plan, too. Plus ça change.