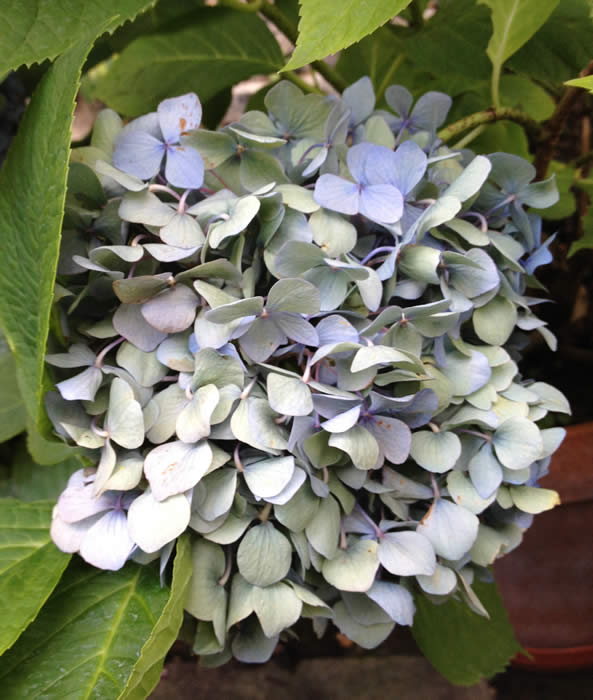 There are colours in fading hydrangeas that give me a little shock of pleasure every summer. The showiest of late summer flowers clearly have pigment problems; acid soil sends them one way, limey soil in the opposite direction. But all their pigmentation seems unstable. They can start out white and turn pink, or pink and go red, or blue and turn mauve or purple, And as they fade, in many cases, their pigment can disappear altogether, leaving a pale parchmenty ghost.

The pigments involved are the usual suspects: anthocyanins of various hues. The hydrangea’s chromatic weakness – which I rather see as a strength – is that its sepals (petals to me, but Trad is a stickler for scientific accuracy) only have pigment in one layer of cells. When they fade, that’s it. But what images their washed colours evoke. The paint on beach huts untouched for years in all weathers, tiny babies’ wrappings, dowagers’ shawls…..

How utterly different from their contemporaries the salvias. Salvias do primary colours. Is there anything redder than S elegans or splendens, or bluer than S. patens? There is a good buttery yellow in S. madrensis, and lots of subtle shading in between. S. leucantha encroaches on hydrangea territory, and S turkestanica is pretty ambivalent. As the hydrangeas fade the central American salvias get in to their stride. The one I wait most eagerly to see is van Houttei, part dusky scarlet, part maroon – and in flower for months on end.