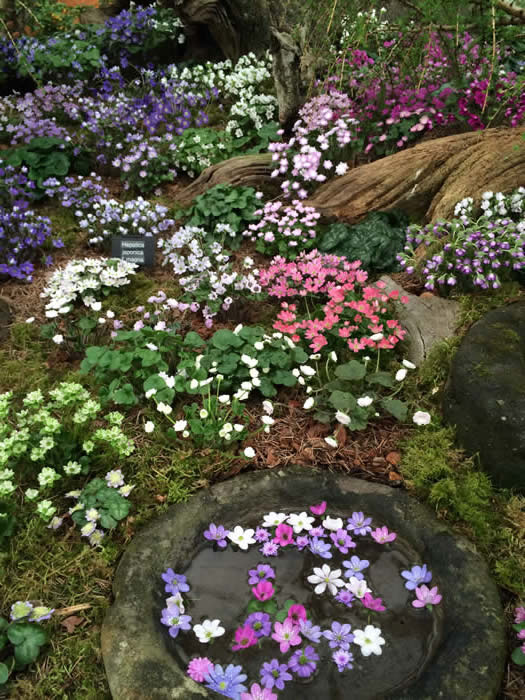 Whether the world of horticulture is holding its breath or not, Trad deliberates long and hard about his Annual Chelsea Award. Here is his rather breathless report. Last year was easy: Dan Pearson ran away with it for his inspired extract from the gardens at Chatsworth. This year? None of the Show Gardens really stood out. (It was disappointing to see the old Rock Garden Bank largely given over to mere commerce.)

It was the Big Top that held the real treasures – the usual suspects all on top form – with the display of hepaticas from Ashwood Nurseries rightly awarded the top gong. (My sole pot of them has never flowered at all.) – Outside it was a tussle between Cleve West’s Exmoor Garden on the corner site of the title sponsor M&G and Andy Sturgeon’s more portentous geological garden for the Daily Telegraph. Cleve West’s was more sympathetic and believable. Both (and many others) seemed to spend so much space – and presumably money – on stonework that the plants risked becoming mere infill. There were lovely quiet wildling colours in many of them, rather than displays of high horticulture.

A potential challenger for the Trad Award was the Winton Beauty of Mathematics garden, precise, beautifully engineered but a tad too highbrow for this simple brain. My second favourite last year was the Occitane Garden by James Basson. This year was a bit of a repeat, but was so much a corner of Provence (admittedly one with a lavender field) that ‘garden’ was stretching the definition too far. It was beautiful. It represented the dusty backwoods of everyone’s favourite part of France with exceptional accuracy. But horticulture had been left behind.