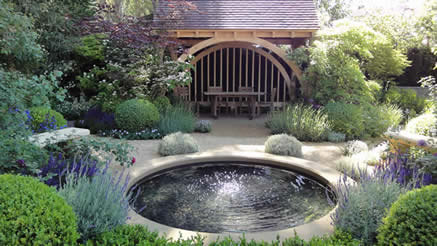 It’s a bit late, I know, but Trad’s annual Chelsea medal has not yet been awarded. Exhibitors’ finger nails must be down to the quick. So here goes. I approve the People’s Choice. The Trad Award goes to Roger Platt, whose garden (the corner one on the left as you turned into Show Garden Row) was apparently voted most popular – but not of course among the judges.

Someone (was it Jill Billington?) said that the Green Movement is the dominant force in gardens today. ‘Puritanical control and the eco-movement’ is the precise quote whose origin I’ve mislaid. One is certainly not surprised to see it in the headlines, but does
this mean it forms a basis of garden design? I didn’t even detect a symbolic clump of nettles in Roger Platt’s garden. Nor a plastic water-recycling butt. He didn’t see the need for PC gestures; nor did the voting public; nor do I. What he did recycle were many of the well-tried tricks that give gardeners so much pleasure, in a confident pattern of paths, arbour, pool and pergolas in natural and traditional materials that many people can afford. And arrange good plants in relatively realistic ways.

The official winner was Andy Sturgeon. What the judges must have liked about his creation were the row of rusty rectangles, the bold straight concrete edges and the eclectic planting (one of this, one of that) allowing you to see the essential earth. If there was a green theme it was well-concealed (at least from me).

Tom Stuart Smith is unmistakable for his evocative simplicity. Somehow his quiet dark rectangular pool among mounds of box created the sense of a real place – even a place with memories of emotions. I suppose his copper box of a summerhouse made sense – but someone will have to explain it to me.