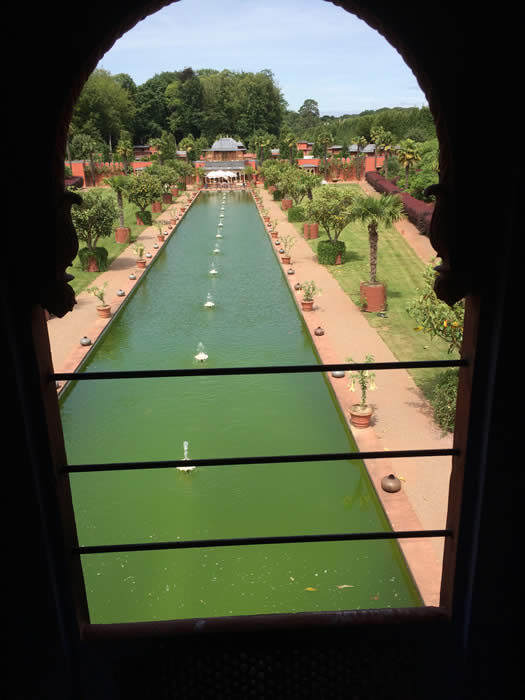 The first question you ask (or rather, I ask) when I see a place called Battlefield  is ‘What battle?’. It’s in Normandy, near Rouen, so my first guess is something in the Hundred Years War; a Crécy or an Agincourt. Not so, I discover. It was an inter-Viking affair, before Normandy became Normandy. Eric Longsword v Robert the Dane. A momentous scrap, surely, for the site to be remembered 1200 years later. Longsword won.

What is momentous today is the château on the site, and certainly its gardens. You thought (or I did) that Versailles, Vaux le Vicomte and that sort of horticultural bling was over centuries ago. Not here: we’re in kilometres of 8-metre hedge and hectares of gravel territory. This is a new garden (no; parc is the word). It stretches regally away from the immense facade of the chateau. (You could parade a regiment in its cour d’honneur, and I heard 10,000 horses mentioned as its 17th century complement.) But there was scarcely a trace left of the original when work started on this.

Question two (after the battlefield one ) is who on earth can – or wants – to do a Sun King today? The answer is Jacques Garcia, the decorator-extraordinaire of Paris and its gratin today. The château’s apartments are as sumptuous as they must have been in 1660. His orchid-house, fern-house, and another vast glass salle simply for New Zealand tree ferns are on a national-botanic scale. Allée follows allée, and parterre follows parterre, enlivened with pools and pagodas, sphinxes of clipped yew, a Roman amphitheatre, vineyards, pergolas of heroic size, flower gardens and pavilions. The Indian one faces a hundred-yard canal punctuated by fountains, palms, daturas and flaring torches. They lead to monumental waterworks: fountains and cascades and scores of gilded spouting frogs – and finally to a massive canal that stretches far into the distance. In true classical style every part has symbolic meaning; the gods of Olympus are in charge – under the baton, that is, of Garcia and his gardener, Patrick Pottier. A million cubic metres of earth are a mere wheelbarrow to this Le Nôtre of our time.

I said last month that Boughton House was grand – and so it is. I will have to find another word for the French way of doing it. Grandiose, perhaps?