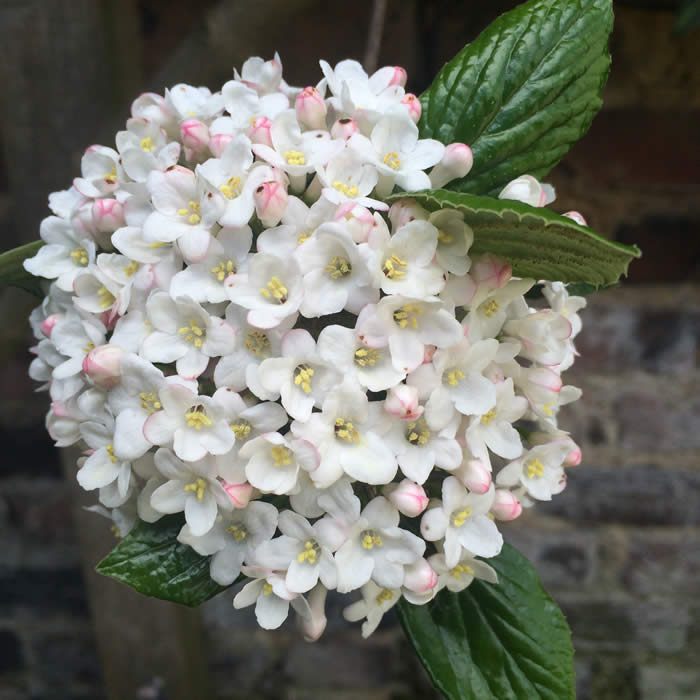 I wouldn’t have thought there was room, but our predecessors in this house were clearly as eager as we are to make the most of what space there is. One dodge I would not have thought of was to plant a substantial shrub right against a wall and train it up a trellis as an honorary climber. As a result we have a two-dimensional Viburnum x burkwoodii, a plant I loved at Saling Hall, where an old specimen was ten feet tall and at least as wide.

It is a very presentable evergreen, at least in London, with dark glossy leaves ridged the way viburnums are. In April it becomes a carnation tree; covered with globes of flowers soaking the garden in something so like the carnation scent that anyone would be fooled. If you sniff closer you may detect the faintest hint of elder (they are distantly related), just as a keen nose with enough practice might detect Müller-Thurgau in a wine labelled Riesling.

It has been tied to the trellis progressively for so long that it almost seems to have picked up the idea, and doesn’t in the least mind a summer clematis as a passenger. I stand on a ladder to tie in the high shoots, shortening them a bit if necessary. Inevitably most of the flowers are nearer the top where the sun sometimes shines.

In the front garden they (I assume it was the same owners) planted what is now a tall hedge of a camellia so marvellous that its flowers attract people across the street. I don’t know its name, but it is perfectly regular with slightly pointed petals like the class of dahlias known as ‘decorative’, and guardsman red. Somehow they don’t look quite right emerging from a hedge: the green/red contrast is too spot-on. But I hope our successors in due course will be as appreciative of some of our planting as we are of our predecessors’.