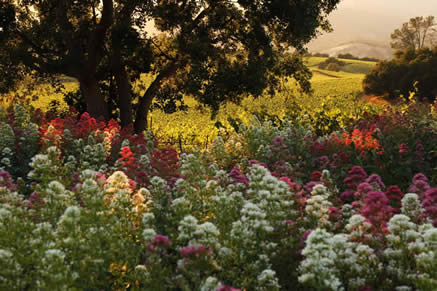 I was on the point of adding, as an afterthought to my piece the other day about my brother’s Italian garden, a eulogy on valerian, when a friend in California sent me a photograph I simply have to let you see. Here it is: Molly Chappellet’s garden on Sage Canyon Road at St. Helena in the Napa Valley. Nothing but valerian, with one of California’s best Cabernet vineyards below and beyond.

‘Valerian’ is Centranthus ruber, a woody-based perennial found all round the Mediterranean with flowers that can be brick red, white, pink or purplish; each plant is different and seed seems to come true. I’m not sure why it has such powerful associations with summer and stony places; perhaps because it can become so rampant. Its great moment is late spring. The other day I was admiring the stone wall along the road at Iford Manor near Bradford-on-Avon, where it almost hides the stones with warm soft colour.

My brother grows it with panache, but the prize has to go to Molly Chappellet’s valerian field. Turn the other way in her inspiring garden and you will see half an acre of Salvia turkestanica.

‘Valerian’ (from Latin valere) refers to its use as a medicinal herb, sovereign, apparently, in cases of nervous hysteria. Or perhaps it was just the soothing sight of it.