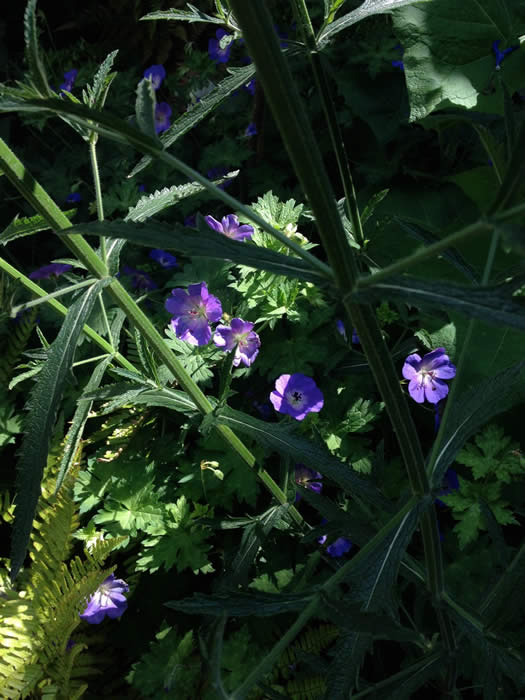 There have been just enough hot sunny days to remind me how much I prefer the shade to sitting, or walking, or doing almost anything in the sun. Shade, that is, with sun round the edges; pools of shade, as under trees, for example. Perhaps I am like a camera film that renders the shady foreground well enough., but can’t handle the light beyond. The image burns out.

The garden is close to monochrome at present, or rather we have so many flowers in the hard-to-name purpley-bluey-lavender-violet range that it looks as though I’ve done it on purpose. They take their cue, it seems, from The Geranium of the Millenium – for surely Rozanne has earned that title. You see her everywhere, as you did Verbena bonariensis a year or two ago – and still do in this garden. Come to that their colours are both in the same part of the spectrum.

So are the little viola that spent the winter in a pot indoors and gamely flowers on in her summer quarters, Campanula persicifolia, a catananche I’ve taken up with, Tulbaghia violacea, which I’m told is rather charmingly known as Society Garlic, and the best of all summer clematis, Perle d’Azur. The newer and smaller Prince Charles is a relatively feeble version of the same colour.

I can’t be held responsible for the roses that flourish high above the wall on our neighbour’s side. They make sure no colour scheme of ours will survive. But do I mind? No, I’m not a schemer at heart, and their Wars of the Roses red and white is a splendid statement. Then on our side there’s Iceberg, Gloire de Dijon, Alister Stella Gray – all our old favourites – and Bantry Bay (perhaps a mistake; pink looks like a compromise).

What astonishes me is how much water everything wants. Above all, of course, the pots. When we go to Wales for two weeks I shall rely entirely on a newly-acquired Aqua-Pod dripper system. The landlord of the corner pub nourishes a lurid display with it. But then he doesn’t take a fortnight off in Wales.