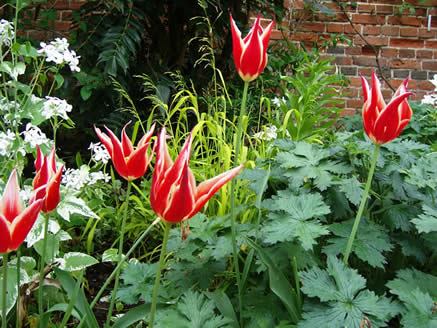 Did you know that gardening journalists get together in secret session to elect the plants we are going to grow? Nor did I, until I was invited to a Bulb of the Year lunch organized by the International Flower Bulb Centre. I’ll give you three guesses where the IFBC lives. Clue: a flat little country across the North Sea. The twelve writers, or someone representing them, each nominated a spring- and a summer-flowering bulb and recited its merits. Cross examination followed. Why, Anna Pavord, do you put forward Ornithogalum ‘Nutans’? Rob Cassy of The Times advocated Triteleia ixioides ‘Starlight’. Both have modest wildflower charm, the polar opposite of Tulipa ‘Black Hero’, for example, championed by Kathryn Bradley Hole of Country Life.

I was not surprised to see the blue Camassia esculenta on the list: it seems to have found its own way into fashionable plantings already. I was surprised by how many of the most formal tulips, essentially cutting flowers, I would have thought, were put forward (as well as the lovely white selection of the species Tulipa clusiana called ‘Lady Jane’). I certainly couldn’t choose between two nerines, the white N. undulata chosen by Anna

Pavord or Stephanie Donaldson’s choice of the more common sugar-pink N. bowdenii. I thought the former for a pot, the latter for a border. But schizostylis, the truly flashy Gloriosa ‘Rothschildiana’, a strange dowdy red Calla lily, two dahlias, an eremurus, a gladiolus, galtonia and two eucomis all got an airing.

It was good to see relatively obscure bulbs battling it out with some obvious choices. The panel were given three formal criteria: Appearance, Versatility and Ease of Growing. I can hardly think of a bulb less versatile than a flaming parrot tulip, one with less striking appearance than Ornithogalum ‘nutans’, or many less easy to grow than Gloriosa ‘Rothschildiana’. The purpose of the conference, though, was simply to focus readers’ attention on bulbs at the time the catalogues come out. I tried to think of parallels with the other business I know: wine. The big difference is that bulbs don’t have vintages. Hence this scheme for an annual renewal of interest.