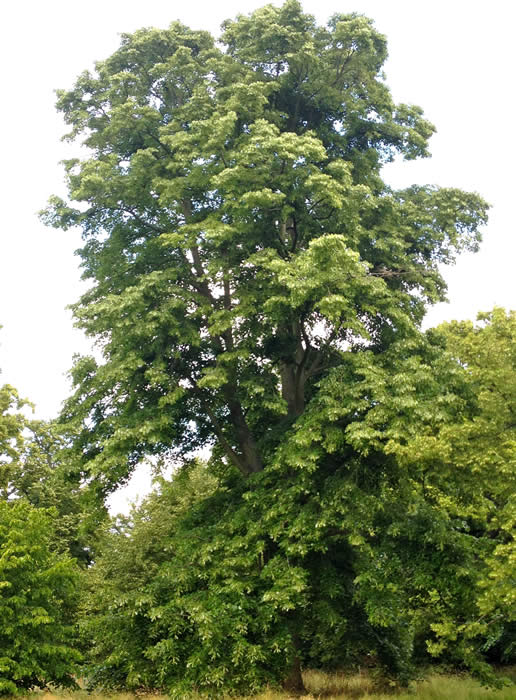 Tilia petiolaris, the weeping silver lime, in flower at Kew

To Kew yesterday for a linden-bath. That was the sensation as I walked in through the Victoria Gate. Straight ahead stands a big common lime, taller than a church and as wide as two, covered with its pale drooping flowers – and pumping out essence of mid-summer.

Turn left past the little temple and a huge weeping silver lime, Tilia petiolaris, is spreading its skirts in front of you, embalming the air. Then they come thick and fast, one species after another, a whole wood of limes, from a squatly spreading small-leaved one, Tilia cordata, like a green and yellow cushion, to soaring T. petiolaris, surely some of Kew’s tallest trees. It is a curious fact about this splendid species (or is it a cultivar?) that it habitually divides into two, or often three, major trunks about twenty feet from the ground. They grow vertically with mighty vigour to make a majestic tower, their leaf-stalks (the petioles of petiolaris) twisting to show the silver-white undersides of the leaves. At this moment its cascading flowers are just opening and beginning to shower down their scent. More limes stand ready for their later flowering, with the fringe-leafed T. henryana from China coming last.

I headed towards the river from this honey-scented zone, skirting the sickly smell of the sweet chestnuts, to visit the Mediterranean area with its perfectly authentic-looking olive grove in a patch of rock-strewn garrigue and the cork oak forest next to it. A huge cork oak lies prone amid citrus and seedling pines next to a signboard exerting us to protect this threatened habitat. Threatened, among other things, by the spread of screw-capped wine bottles and consequent decline in demand for corks.

I’m not sure about this. The demand for wine-corks has grown exponentially in the past thirty or forty years, since wine became the popular drink it is today. In the past a relatively small proportion was given the dignity of a cork and capsule. Cork had many other uses, from buoyancy aids to insulation to high heels, but any increase in oak-acreage due to wine must be pretty recent. It’s not screw caps we should blame, but substitutes for its other uses. Let’s have more cork-tiled floors – and thank goodness we’re seeing the decline of the corkscrew.