Top: A hydrangea at Exbury (I wish I knew its name)

What would I do with them if I took a tenth of the photographs that have tempted me in this last week of five-star weather? I haven’t wasted it indoors. I managed a visit to Exbury on a day as clear as a jewel, the air still and just that crisp side of balmy that makes you (or rather me) feel one glass of champagne to the good. Exbury is always known as a spring garden; the glory of its azaleas and rhododendrons seems to eclipse its other aspects.

Now, with autumn ready to pounce and fires kindling in the maples and liquidambars the occasional rhododendron eccentrically in flower is rather like a black tie at a lunch party. But the harlequin hydrangeas, the pale plumes of the grasses, the colchicums and nerines lead you from glade to glade, and you have time for the infinite variety of the trees; an arboretum framed in monumental oaks.

The New Forest is a gallery of pictures in any season. Glimpses through the trees on the Brockenhurst train make me long to record them. I realised, though, as we raced through Hampshire, the pleasures of the passing landscape, prospects composing and recomposing, crops and copses, swelling downs or dark mantles of woods racing by, are far less visible than they used to be. Railway companies used to clear the saplings from beside the tracks: now long curtains of dull sycamores screen off the scenery.

I spent the weekend of the Garden Literary Festival, the third organised by The Garden Museum, at Hatfield House, the great garden, in the classical sense, that I know and love best. The sky was that ineffable blue; a faint breeze just made the reflection of the great pink house in the lake more liquid, the ancient trees in the Wilderness seemed more massive than ever and the fountains sparkled and crashed in the grand box parterre below the South front.

The delegates at the Festival moved from lecture to lecture, from Banqueting House to Marble Hall, strolling at leisure through parterres on a princely scale like the figures in Repton’s Red Books, almost dwarfed by their surroundings.

The North front has a new adornment: one of Angela Conner’s dramatic water sculptures (and I should guess her biggest yet). It rises maybe twenty feet in the centre of a circular lawn like two great curving, gleaming horns, splashing water slides that would tempt any toddler, framing a golden globe. Of course I photographed it. 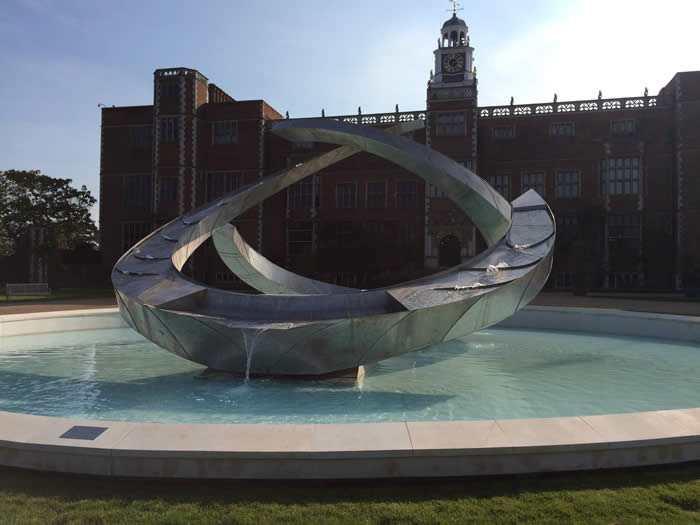