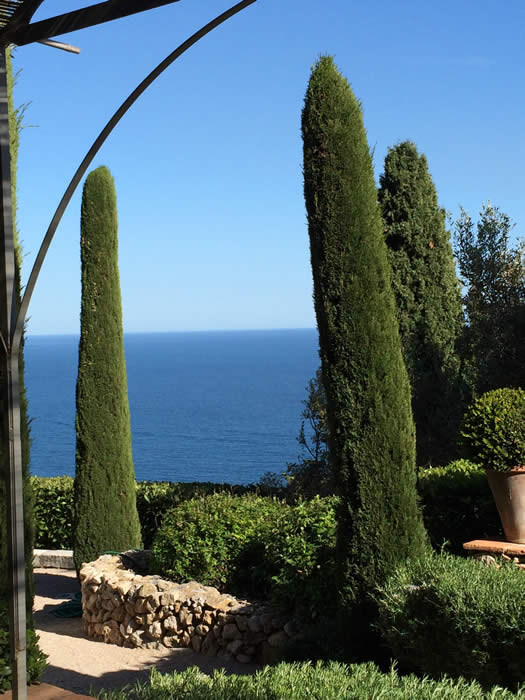 We have been planning and nurturing our son-in-law’s and daughter’s garden by the sea (the Mediterranean one) for ten years now. The dream is now a fact, but I still have to pinch myself to believe that we conjured into being these terraces, this tunnel of vines, these whispering cascades, the pool, the olives and cypresses and curtains of green and blue rosemary covering the stone walls, this bounty of lemons, the irises, the agapanthus, the jasmine whose clustered flower-buds are clots of Imperial purple peeped through with white, its scent hanging heavy all around.

Above all, though (and not conjured by us) the view to Cap Ferrat across the bay hundreds of feet below. I get up in the night to gaze at it under the moon.

Just along the coast at Menton is the garden that Lawrence Johnston, the creator of Hidcote, was planting at the same time in the 1920s and ‘30s. He gave Hidcote to the National Trust in 1948 and moved here, continuing to embellish his Menton hillside almost up to his death in 1958. Last year in April I found a sad notice at the gate, ‘Fermé a` cause des intempéries’, the French word for the weather the BBC calls ‘atrocious’. Big trees, some of them extremely rare, were brought down in the gales. But gales are sometimes blessings in disguise: no one feels authorized to thin out historic overplanting when the specimens are important originals. A decision made by fate can be a relief, and certainly this year the garden is in better shape, with more space and light in some overcrowded parts.

Like Hidcote, Le Serre de la Madone was made from scratch on farmland – in this case up a steep valley at right angles to the coast, not for the sea view. The two gardens seem to have little in common. La Madone is essentially a series of twenty hillside terraces, some quite narrow paths, linked by wide-spaced flights of steps and hairpin bends at each end. There are plateaux at the top and near the bottom for pools, conservatories and a little box-edged formality, but the essence is the south-west-facing slope as a sheltered home for Johnston’s exotic finds, planted in what now seems a random medley with the native flora. Half the flowers you will recognize from English gardens; Hidcote for example. Half leave you (or rather me) struggling to pronounce their multi-syllabic labels, or to trace the origin of sweet exotic scents. On the lower terraces I stopped and pondered a marvelous perfume until I realized that little cream and yellow freesias had naturalized on a whole bank among irises and acanthus, and teucrium and rosemary.

I tried to imagine Johnston and his famous little pack of dogs wandering on the hill to decide where some rarity collected in China or South or East Africa was to go. I’m sure he had the pot in one hand and his spade in the other. As a bachelor with twenty three servants he didn’t lack help, yet he is remembered as an ascetic and even a loner. He can have had little idea of how big some of his trees were to grow. Hidcote is considered, calm; a masterpiece in entrances and enclosures, masses and voids, that set the garden room fashion many of us still follow. La Madone is more a gallery of curiosities, long left to their own devices, now being carefully restored and replenished by an evidently inspired new and local gardener-botanist, Claude Antoniazzi.

It is still early in the season. Ceanothus and the spires of echiums are blue, a wide slope by the villa is a sea of orange-red chasmanthe from South Africa, spidery little flowers on iris underpinnings, but not much is yet in flower, and a great deal not yet in leaf. Spring on the Riviera is no match for a northern spring, the breaking of an iron grip, the restoration of green to a bare landscape. It is another phase in a cycle of benevolence, now gently under way.

The picture that has changed most, perhaps, is in town on the market stalls, now piled high with every plant that’s good to eat. Beautiful little yellow potatoes, mounds of dewy spinach, tomatoes from miniature to deep-grooved monsters, bunches of little turnips, white tinged purple, onions of all sizes, red and white, beans like green matchsticks, cucumbers and courgettes, carrots scrubbed and gleaming, white garlic and chicory and mushrooms, beetroots in leafy bunches, six kinds of lettuce, mesclun, rocket, herbs, artichokes, aubergines and avocados, asparagus from the Durance just up the road. Everything proudly labeled ‘France’. No kale. France rightly eschews curly Scottish cabbage as cattle fodder.