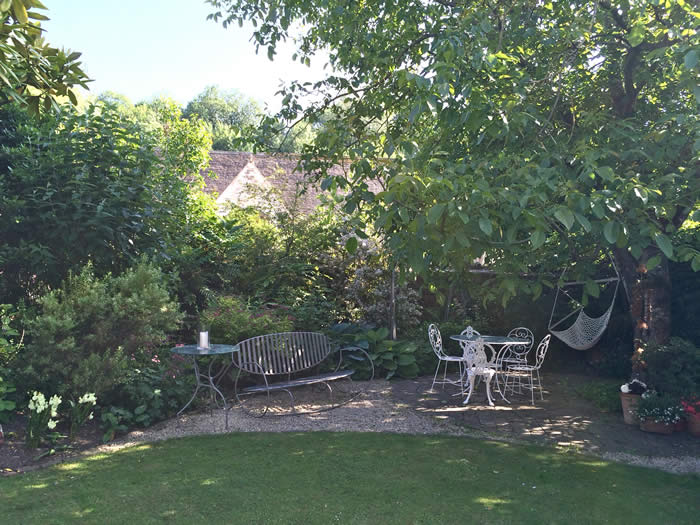 My brother-in-law, Simon Relph, has made a beautiful and ingenious little garden behind the 14th century farmhouse by the famous tithe barn at Bradford on Avon. Its glowing stone gable peeps through the walnut tree at the end. Simon has contrived lawn, pond, terrace and a rich choice of plants and left himself room for an immaculate vegetable garden, framed last weekend by roses at their peak. “Rambling Rector” spreads its froth of flowers for fifteen yards along the old stone wall.

But they’re moving house. A lucky successor will inherit five years’ work. We were taken to see his next intended project, a modern house with three times the garden space – and I confess to a twinge of envy. If he can encapsulate so much in the confines of the old farmhouse yard what fun he’ll have with this almost-virgin territory.

We discussed the trees. They are the first and most crucial decision in any new garden. How do you weigh the fact of an established but dull tree against the chance of choosing something better? Of course you plan for both. A few are so revolting that the chop can’t come soon enough. A worn-out Prunus amanogawa (the pink cherry that apes a Lombardy poplar) is instant firewood. A droopy old Lawson cypress might be spared (but mainly on the grounds that it isn’t a Leyland). A dingy purple plum gets its quietus (not to mention that most villainous of shrubs, the yellow-leaved choisia). What to do with a misshapen neglected ash? A clever surgeon could improve it. But there’s a centenarian beech to one side and a thriving walnut in the middle. And space for fruit trees, magnolias, dogwoods,…

My instinct (not that it’s my garden) is to consider the light and shade first. Decide where you’ll want lunch on a hot sunny day. Make your shady spots as appealing as you can. White furniture under a handsome tree draws people’s feet like a magnet.

Next comes the division of space; the apportioning of rooms. Will it be explicit, as in clipped hedges, as implied by the massing of plants? Or, of course, both? I can’t wait to see it take shape.

The Piet Oudolf garden at Bruton belongs firmly in the present, Oudolf was given a sloping field beside the new Hauser & Wirth art gallery (whose restaurant, a sort of tidied-up Petersham Nurseries in Skye Gingell’s day, vaut le détour). Oudolf, as everyone knows, plants abstracts with sinuous blocks of “prairie” plants. There are no impediments to your eyes wandering over a vast field – nor any plan, it seems to me, in the paths wandering round the beds. You can romanticize about the sense of space, the breadth of the sky, the movement of the wind in the (many) grasses. The two garden essentials of shelter and seclusion are totally absent. Do they (as I half suspect) represent, to a right-on modern world, infected with socialism, the privileges of privacy – or indeed the privacy of privilege?