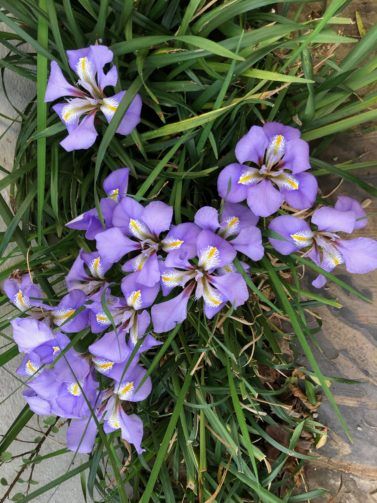 The first flower appeared on Christmas Eve, just before we left for the country: a mauve miracle, pale and light-reflecting, with the gold details of a brooch. A wide-open, laid-right- back IrIs. I tweeted (one has to do something to express joy) “A just-in-time Christmas present from God”.

When we got home three days later the little bed in the front garden was thronged with them, a dozen pale lavender brooches looking up at me, and another dozen tiny pouting buds. Flowers are expressionless. They weren’t smiling, just being. Being what the infinitely strange process of evolution has made them – just for now.

Nothing stops evolving. In millenia to come Iris unguicularis will need a new name. It had an old one, Iris stylosa, but taxonomic wisdom saw through that, back to the first time it was described and named, in 1789. Its godfather, Jean-Marie Poiret, was a French priest fascinated by what was then called Numibia, now Algeria, its barbaric culture and its plants unknown in France. His account was published in the year the French Revolution reached its savage climax.

Poiret, with a botanist’s eye for a plant’s distinguishing features, used a Greek word that means ‘sharp-clawed’ – an improbable name for such a soft and delicate flower. He was looking at the petals, which with a lot of imagination do end in a point – though hardly a sharp-clawed one. By the rules of botany, though, his momentary analogy of petal and claw is fixed for ever. He got there first. Where I wonder will evolution take it next? Will it evolve in its arid habitat some new distinctive trait? That will be a problem for a taxonomist a million years hence. And why does it flower unpredictably in bursts in mid-winter? EA Bowles, who looked deep into his favourite flowers, dissected a flower with a razor and discovered that the style, the vital female organ that carries the pollen to the ovary, runs all the way up the flower’s long stem. The ovary is right down at ground level, protected among the long leaves. Hence ‘stylosa’. Perhaps Poiret didn’t know this.