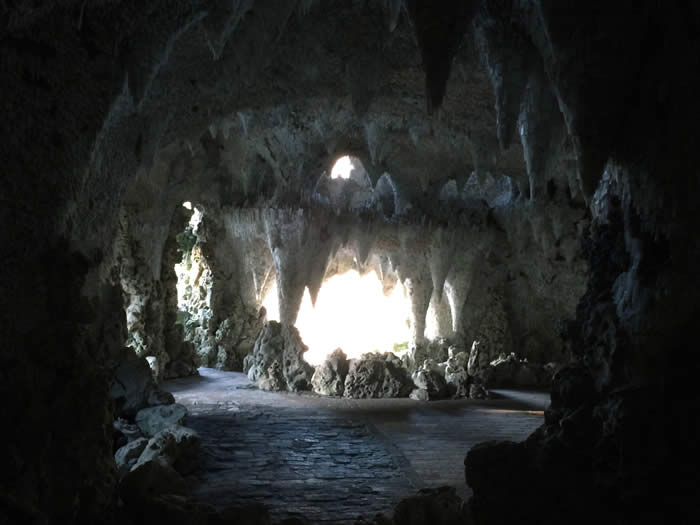 (Visitors should note it can also be gloomy and damp. The grotto is open at weekends only; see the Painshill website, but there is a whole day's worth of interest in the landscape).

Back to Painshill, to see the grotto I had only glimpsed from the outside in November (see my entry of the 30th). Glum grey days have been alternating with brilliant icy ones recently; happily I chose one of the best (or perhaps it’s just Surrey: it was glorious when I went in November, too). This time I was conducted by Janie Locke, who since the beginning of the restoration project in 1981 has been its presiding genius. It was the local council, Elmbridge, that took the very unusual initiative of buying the 150-odd acres of the neglected property, piecemeal from various owners. It was their young recruit Janie Burford (now Locke), with a newly-formed Painshill Park Trust, who instilled the necessary enthusiasm and confidence into the locals, recruited the volunteers, surveyed the site and its trees, kick-started the archaeology, went out to find funds and designed and directed the project over 22 years.

It turned out to be the perfect day to explore a grotto. At this time of year, the low sun can make driving a car almost impossible (west in the morning, east in the afternoon is a sound rule, but the sun in my wing-mirror blinded me the other day). It is a revealing time to make observations in any garden; brilliant light at these low angles is what you get late on summer evenings (but then the sun sets much further north).

The grotto lies on an island in the lake, heavily hinted at by outcrops and an arch of the weathered oolitic limestone of its construction, a strange holey stone. You cross on a white wooden bridge that hints of Chinese lattice-work (but was in fact designed by Palladio). A sunken entrance leads into a gloomy passage lit by openings onto the lake, its atmosphere stony and cold. But a golden light lay ahead. The main chamber was flooded with sunlight reflected from the water through jagged apertures. At its low angle, shining on a thin skim of ice, it bounced into a ceiling dropping with great glittering stalactites. Dozens of these craggy cones of different sizes, and the rocky walls around are covered with slivers of felspar, calcite and quartz crystals, reflecting minerals that flash back the sun. It is hard to imagine such a gilded, glittering cave. What creatures should inhabit it, I wondered. Ariel-like spirits, perhaps, with gossamer wings.