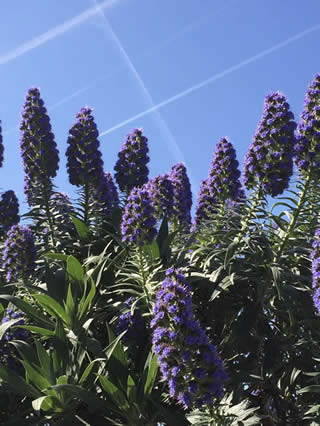 The plant of the moment at Tresco, if I had to choose one, was the echium from Madeira, Echium candicans. When it was accompanied by the monster geranium from Madeira (G. maderense is happily naturalized on the islands) the sight was one of the most splendid in gardening.

I believe I’ve hinted, over the years, at my faiblesse for anything blue. Unconsciously I seek out blue flowers in gardens. In nurseries I head straight for the blue plants. It is a minority colour; there are ten pink/mauve/reds and maybe twenty yellows to each blue – and true blue, in the range you might call French, butcher’s or sailor’s, is rare. Ceanothus gives us some pretty punchy deep blues; hydrangeas tend to wobble between blue and pink. Borage is a clear lightish blue…. but its subtropical cousin, Echium candicans, is the real deal.

The Scillies are mild enough to make a shrub of it. It would struggle in most places on the mainland. Its cousin E.pininana can get close, as an almost ridiculous spire, for a year or two, though often wandering from blue towards red. Its other equally lofty cousin, E.wildpretii from Tenerife, lets the side down by being red, thus of scarcely more interest to my blue-besotted eyes than a red delphinium.

On a visit to Cambridge the other day, though, I had a 60 volt shock. One of England’s most photographed walls is suddenly under siege from with echiums. The splendid sandstone flank of Clare College, the left hand part of that view of King’s College that symbolizes King’s, Cambridge, and sometimes even England on calendars, is a frenzy of flowering spires.