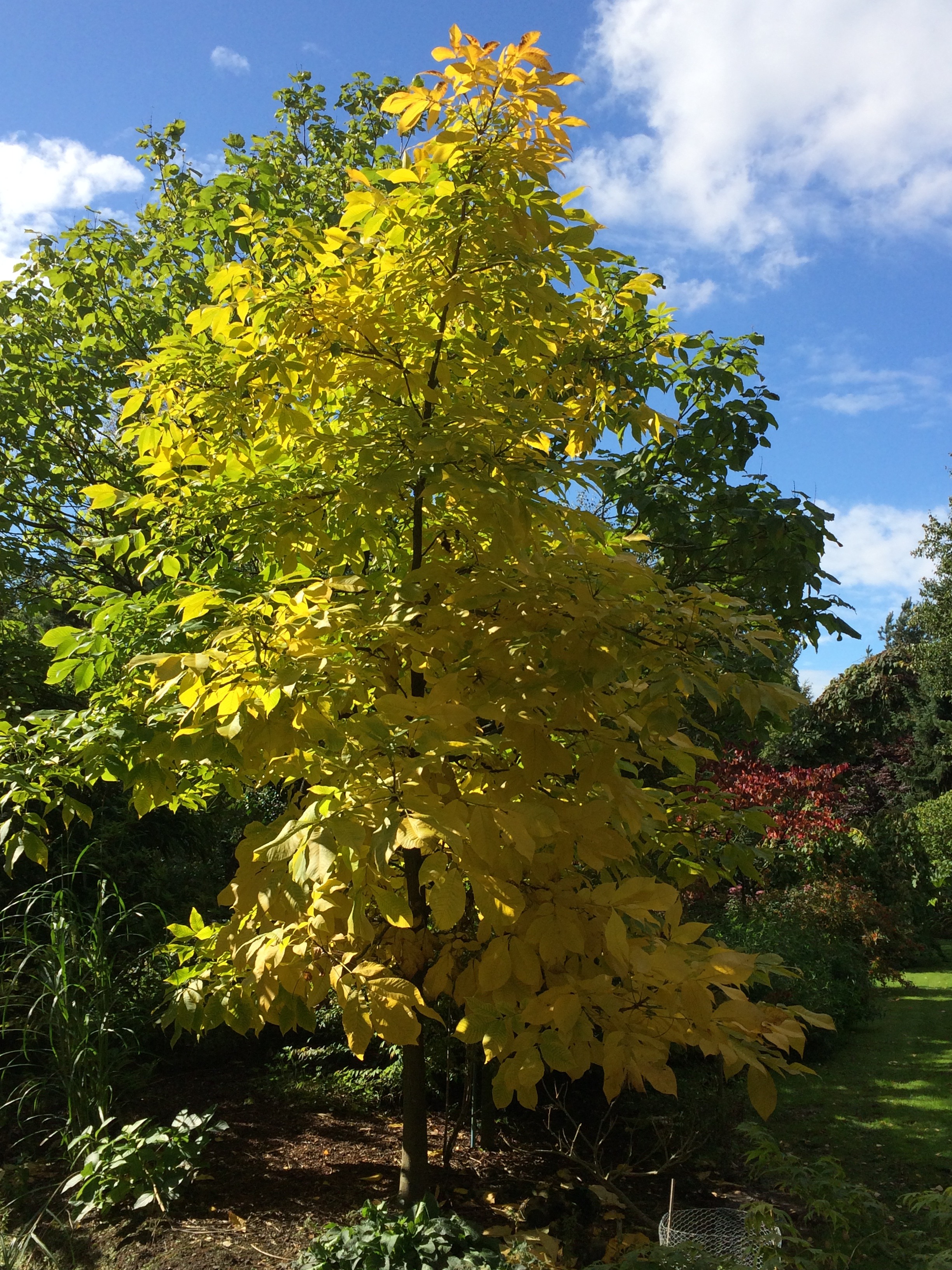 Bluebell Nursery and Arboretum had been on my must-visit list for far too long. Its name comes up so often when I look up anything woody and unusual. I wasn’t very clear where to find Ashby de la Zouch, alluring though it sounds; the answer is between Leicester and Burton on Trent, a part of the country I hardly know at all. Zouch, my screen tells me, derives from souche, a tree-stump. Could there once have been such a whopper there that they put in on the map? Or might it have had a less corporeal significance, as in The Noble Stem of Jesse?

What stands out in a garden on a first visit is above all the plan; it should be clear, and it should make you want to explore. Then it is all a matter of timing – and late September is very much between seasons. Early autumn colour was largely yellow, brightest in Cladrastris kentuckea (or lutea), the so-called Kentucky Coffee tree. Its little fragrant flowers alone  hardly make it worth growing, but it can be a glowing golden beacon. Celastrus orbiculatus was almost equally bright,  but I’m not sure the tall tree it was strangling would have been very keen. Red was provided mainly by berries. Every time I see the American Ilex verticillata I make another resolution to plant it. A deciduous holly doesn’t sound particularly tempting when we have so many evergreen kinds, but it carries masses of scarlet berries like few other shrubs.

Two generations of Robert Vernons have created first the garden and nursery, then an expanding arboretum. I asked ‘young’ Robert why here. ‘Needs must’, he said. The site they were hoping to buy was sold for housing. Ideal this is not. Open soil and good drainage are , you would think, the first requirements.  How encouraging it is to see how many things are thriving on stodgy clay with only shallow trenches for drainage. The secret, of course is in sensitive and specific cultivation; the excellent labelling includes notes on their different mulches and when they are applied. There was a pungent smell of spent hopes from a local brewery in the air.

The garden is mature, personal and intimate, a meandering journey through a deeply interesting collection of trees, shrubs and generous clumps of perennials. The eyecatchers, of course, in September were hydrangeas; even the fading panicles of Hydrangea paniculata are graceful and full of light. Anyone would be tempted. ‘Do your customers know what they are looking for?’ I asked Jason, the manager.  ‘A few’, he answered. ‘The trouble is they expect big plants, but we can’t grow fields of rareties. They can be a bit crestfallen when they wait a year and then are given what looks like a stick in a pot’.