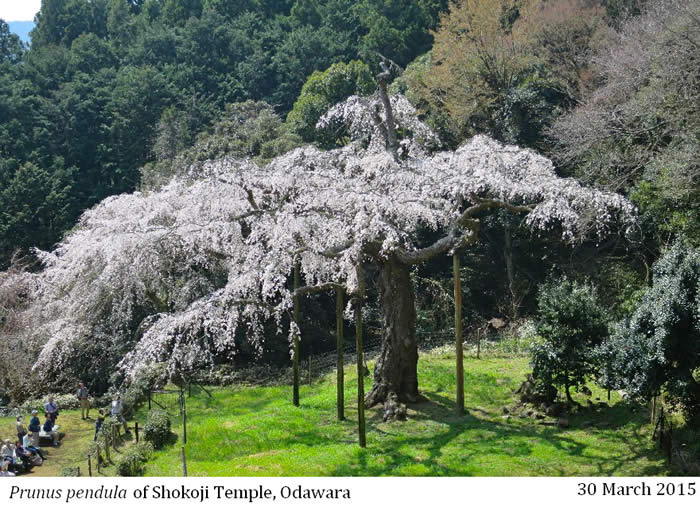 My occasional correspondent in Japan can react with charming enthusiasm to things I write. She frequently provides me with facts I would never find without her. She also, quite unwittingly, gives me the feeling that we in the west are all novices at the game. The Japanese have been enlightened, demanding, hugely ambitious and intensely focused gardeners for twice or three times as long as we Europeans. They were developing techniques and collecting and breeding plants and refining their taste, while we still thought a Hortus Conclusus was a pretty nifty bit of avant-garde thinking.

Take the flowering cherry. We date our appreciation of these springtime wonders back just over a century. They even have the reputation here (with some justification) of being short-lived; just instant décor.

The whole deal is different in Japan. The population puts on its Sunday suit to greet them, picnics on the grass (lots of sake) and gives them National Monument status. My pen-friend sent me this postcard of a weeping cherry that Engelbert Kaempfer might have seen on his visit to Odawara in 1691.

This was in reaction to my story about the Californian James Light, his glasshouse and his orchards where Silicon Valley now stands. Her great grandfather had a plum orchard on the very spot. Japanese gardeners are still relatively common in California today. He installed his family on San Francisco Bay early in the last century. He had to retreat back to his family in Japan in the 1930s when Wall Street crashed. Then came the war and he never returned.