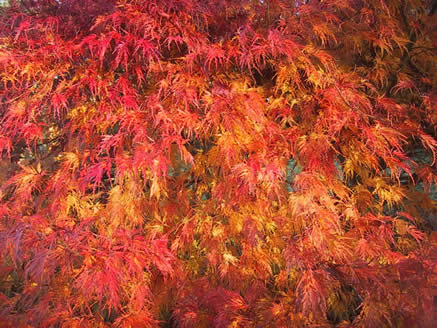 Mild, dry, still weather meant a slow start to autumn. You learned which plants are in a hurry to shed their leaves and which need time, or a sharp jolt of frost, to make the cut-off. It is the function of a chemical, abscissic acid, to prepare the junction of leaf and twig for the moment of rupture, when all the nutritional value the leaf can give the tree (or shrub; applies only to woody plants) has been absorbed.

I see that Kew has been having a splendid autumn. Tony Kirkham wrote in The Times about it. Ours, I would say, has suffered from lack of organization. Instead of our grove of Norway maples all turning yellow together we have a motley of yellow and green, and bare twigs where the leaves fell prematurely.

Even Acer cappadocicum, the Caucasian maple, year after year a sure thing for a butter mountain of colour, went threadbare before turning. Amelanchiers, in contrast, always early to turn red but usually very brief in colour, turned a moderate orange and stayed that way for three weeks.

I wonder why Japanese maples leave their colouring so late. I used to go to Japan regularly in mid-November and find them at their dazzling peak. Here there is still more scarlet, and crimson, and orange and sheer burning flame to come. The scarlet of Acer Palmatum Osakazuki, the best in most years, is developing but subdued, and Seiryu, whose filigree flames are incomparable, is still like embers waiting for the bellows. Our Parrotias, meanwhile have earned their place as my Tree of the Month