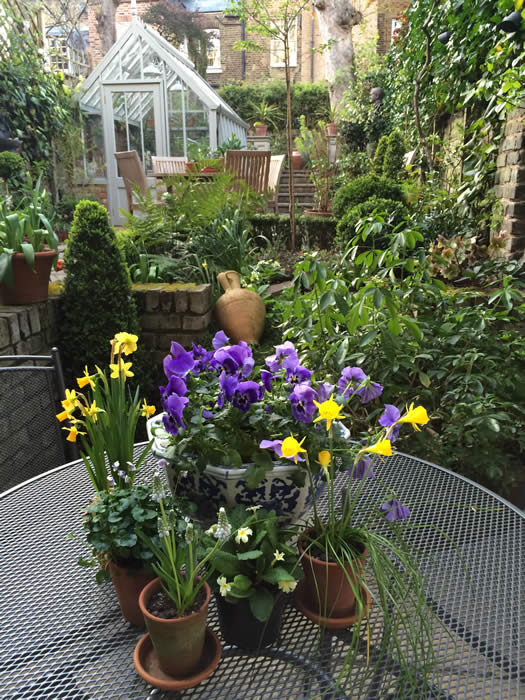 I was quite keen on the mossy look at first. In a largely paved garden a hint of green on and between the paving stones softened their harshness. It seemed to show that nature was accepting the intrusion. Someone, it seemed, had slipped a green filter over my specs. I rather liked the effect.

But then the green started spreading. It tinted the floor, the brick walls, the base of the greenhouse, and in due course the teak table and chairs. Seeds germinated between the slabs. I like violas and hellebores and foxgloves and campanulas – especially C. persicifolia – but I don’t want to tread on them. Without a modicum of spit and polish a town garden can start to look scruffy. So we accepted the offer of a clean-up with a high pressure hose. The green sluiced away was replaced with shades of ‘natural’. Now we hope the scrubbed-clean look won’t last too long.

What did I think of artificial grass, someone asked me the other evening – tentatively, almost shamefacedly, I sensed – as though suggesting something indecent, or expecting a put-down. Why on earth not? A little patch of lawn in London is usually a sad thing. A mower is clumsy in a small space. And as soon as the football comes out you have a patch of mud.

We are almost wholly paved, so it doesn’t arise, but our daughter over in Fulham is investigating a carpet lawn for her children to roll around on. The website she sent me to comes up with a surprising range; the poshest called Mayfair (New for 2015!), then presumably in descending order of poshness, Kensington, Chelsea Super Soft, Wentworth, Holland Park, Belgravia and Knightsbridge. The ‘turf’ is laid on a porous ‘shockpad’ to make it springy underfoot. All you do, apparently, is brush it now and then. Should we, come to think of it, start thinking green in a more positive sense?