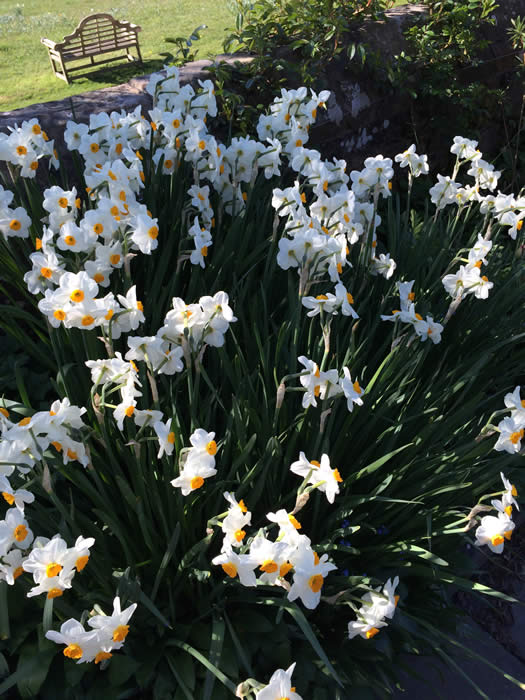 Why have I neglected Gravetye Manor for so long? We used to be regular visitors to William Robinson’s old garden, enjoying its renaissance as a hotel with an owner, Peter Herbert, who very much got the point and restored the essentials of the garden round the splendid Elizabethan house. His thirty-odd year reign there settled Gravetye as the base of choice for exploring the most densely-gardened corner of England, with a dozen notable gardens within easy reach. And his care for the table was equally rewarding.

A new owner with deep pockets, Jeremy Hosking, has since given the hotel and the garden another uplift; renaissance is the word being used again. Five years ago he tempted Tom Coward from Great Dixter, where he was working with Fergus Garrett, to take over and complete the restoration . What would Wiliam Robinson have done with modern plant s and methods (if with rather less than his army of gardeners)? Wandering in this extraordinary place one can glean some idea.

This is a heady spring to visit any garden in the south of England. Nothing has interrupted the budding and blossoming since the new

year. Each morning at home we draw the curtains to see long branches of blossom on the double white cherry in the street, our pink magnolia in the front garden, and the sumptuous sight of our neighbour’s weeping cercidiphyllum, a cascade of circular leaves of fresh lawn-grass green hiding the street. I laze in bed for five minutes counting the planes pass through the blossom as they line up for Heathrow.Gravetye in mid-April was inebriating. In the parterre west of the house the sharp sunlight focussed each flower and lit the tulips like gemstones, a cacophony of laughing colours . The peculiarity of Gravetye is that the whole garden seems to face south. It lies, drinking in the sun, above a wildflower meadow sloping south-west down to a lake. Always on the lookout for plants flourishing in shade I drew a blank.

The Robinson style is all about detail; plants ingeniously mixed to harmonize, flowers chosen to complement one another and give the impression that The Creator had had a particularly good day, unaided by man. They didn’t use the term plantsmanship in those days, but this (rather than collecting rarities) is the true meaning of the word.

The magnum opus of the moment is bringing the walled kitchen garden back to life and productivity. It lies up the hill a hundred yards from the rest on the edge of the forest of 1,000 acres that Robinson planted or assembled. Perhaps there are other circular ones; I don’t know. Many certainly have curving walls to the north to trap the heat. But this is like an elaborate enamel brooch, the centre striped with different vegetables and the circumference ringed with soft fruit and wall-trained trees,

Tom Coward has written in Country Life about the logistics of gardener and chef working in tandem. Whether it always goes perfectly to plan or not, it is part of the romantic horticultural dream that Gravetye represents.