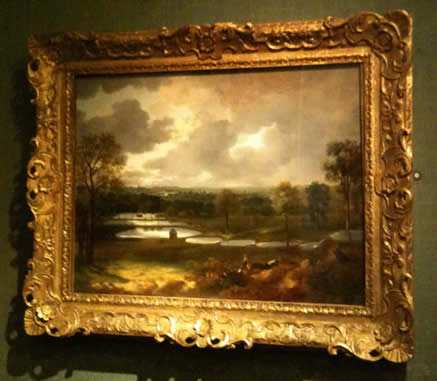 There is a landscape I have never seen that has been haunting and inspiring me for twenty years. It is a chain of ponds in a painting: a retreating procession of silver surfaces that took hold of my imagination and still won’t let go.

Wherever I first saw it, presumably in a book, it went with me to France when I was trying, with laughable over-ambition, to impose my will on two hundred acres of deep bocage. I set about channelling the stream that issued from a generous spring in the hillside to form three oval ponds descending into the valley so that from the track at the top they formed a gleaming chain. It was a struggle. The soil was so ‘filtrant’, to use the French term, that as soon as I cut into the marshy stream bed as it meandered down the hill it immediately carved itself a channel and disappeared in the coarse sandy ground.

Eventually, using a piece of pipe here and a primitive bridge of logs there, I persuaded it into my little ponds. For a few summer weeks I had my picture. Then the deer identified them as drinking troughs; their hooves broke into the lip of each carefully excavated hollow and the water found another way downhill. Cattle joined them from another field and a general swamp began to form.

You would be amazed how soon goat willow seedlings spring up, reeds multiply, and the muddy mix is a pond no more. As for the swamp spurge, Euphorbia palustris, I optimistically planted; the Azalea mollis in bold groups, the bluebells and ferns and the red-stemmed willows, their trashing was almost instantaneous. Do you know how much deer love stropping their velvet on young willows? Does the aspririn in the bark cure their headaches?

The picture stayed in my mind though, and came thrillingly to life when Lady Salisbury apparently dreamed the same dream at Hatfield House. Using the spillway over the dam that forms the lake, she remade the identical scene – but solidly in sensible material, and with an abundant supply of water: three shining discs descending, in this case, into an ancient wood.

Did we share the same inspiration? Indeed we did, And last weekend I saw it, in its frame, for the first time. It hangs in the wonderful little gallery in Christchurch Mansion in Ipswich. It is Gainsborough’s painting of the park at Holywells, a mile 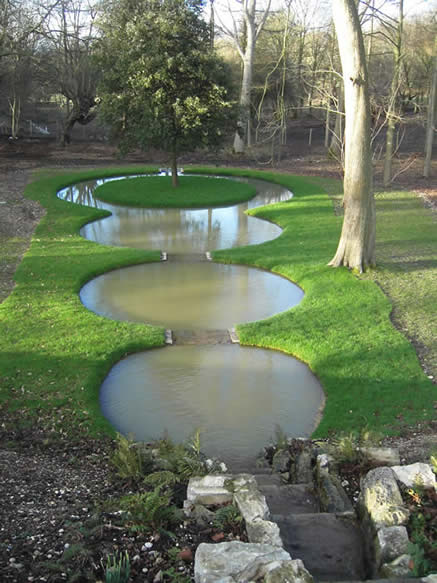