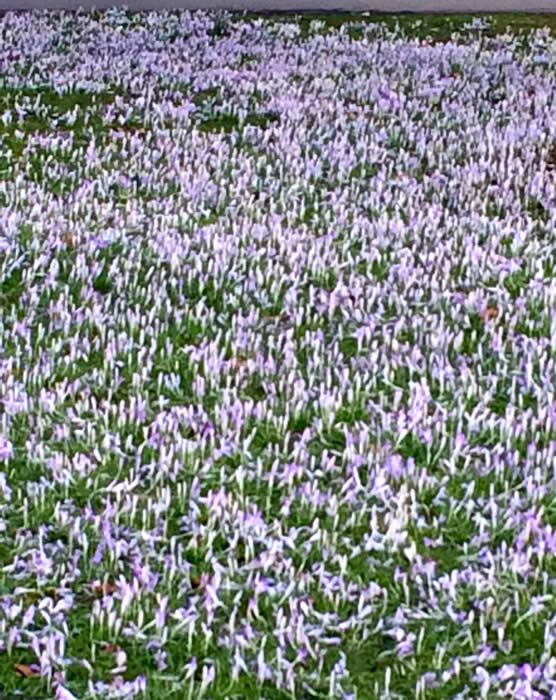 The weed with an AGM

Crocuses are so sudden. There have only been three days of open weather, wide light skies with clouds you can count, a breeze without an edge, and they come out of hiding. The weather, of course, is a February Feint. Next week, the blizzard. But it’s a little trailer for spring just when you’re starting to need it.

Crocuses are like snowdrops, interesting as individuals but sensational as whole armies. I wouldn’t say that about roses. It’s worth going a long way to see a woodful of snowdrops, and most certainly worth going to Kew to see the little tommies. Crocus tommasinianus is not (I imagine) a connoisseur’s plant, but the impact of a tennis-court’s-worth, its mauve suffused with a silvery sheen in the sun, is unique. Do they glow at night? Propagating them is not a problem; they may be the only weed with an AGM.

Their name is scarcely in their favour, but call them Crocus de Tommasi and they sound much better. The suggestion comes from a charming website I stumbled across, as one does, looking for more than the dull physiological details. The stories collected by besotted amateurs make far better reading. This website is called In Paghat’s Garden and comes from Puget Sound in the state of Washington. Sadly internet entries are rarely dated (surely something its masters could fix) so this may not be hot news.

Paghat tells me that tommasinianus is derived from the botanist Muzio de Tommasi. In the first half of the 19th century he explored Carinthia, Friuli and Dalmatia, in the southern part of the Austro-Hungarian Empire, with, among others, George Bentham (of Bentham and Hooker), and also found time to be Mayor of Trieste. I love to be told that Germans call it the ‘elphin crocus’, and I shan’t struggle with tommasinianus again.