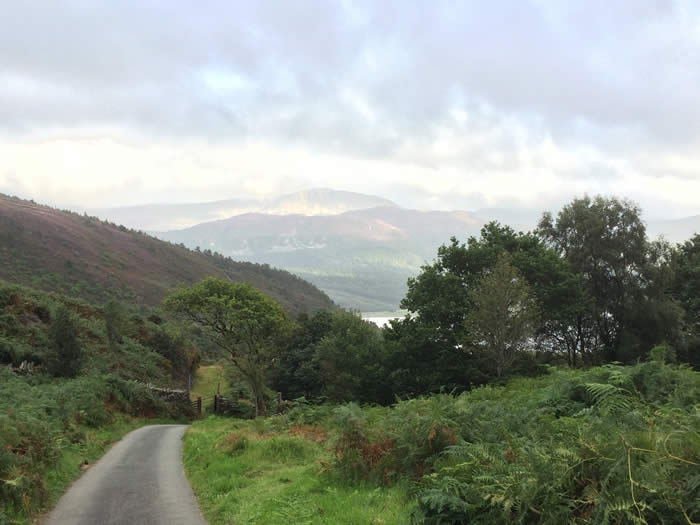 We don’t expect to spend much time on the broad sandy beaches of Snowdonia in August. Nor did we. But days of solid rain had done magic for the streams that chatter and gurgle through our woods. There are springs where I’ve never seen them before; the expensively-surfaced tracks are water-courses, their stones washed loose, and some of our stream-side paths have become stream-beds. But the new roof on our old mine building (we’ve upgraded its name from ‘the hovel’ to ‘Myrtle Mansions’) keeps us dry, and its new skylight lets in daylight we never had before.

There is a whole complex of ruined mine buildings where our goldmine used to be – or rather would have been if they had ever found gold. This was in the 1840’s and 50’s when gold fever seems to have broken out round the world: California, Australia, Canada, Colorado, New Zealand, and even Wales. (South Africa and the Klondike came later, in the 1880s). For a short while the Mawdach Estuary was a baby Ballarat.

Our mine includes the remains of the grinding shed, where the power to grind the ore was provided by a 30 foot overshot waterwheel, a couple of other buildings now reduced to their grey stone gables, and what we take to be the canteen and the manager’s office. The canteen has a huge hearth and the manager’s office a little one to keep his back warm as he watches his workers (some of them seven years old) through a panoramic (by Welsh standards) window.

But the best part is the mine itself, a horizontal ‘drive’ hacked and blasted a hundred yards into the hillside – at which point they realised that copper was the best they were going to get. The mouth of the mine is our grotto, a jagged hole in the hill, dark grey stone adorned with ferns, with a slow brown stream flowing out into the woods.

When we bought the property I was worried that someone might be tempted to explore, wander in and fall in the darkness, so I installed a gate of vertical iron bars. Years later I had a letter from the Welsh Bat Authority in Cardiff, telling me a colony of bats hibernated in the dripping blackness. Was I aware, it asked, that lesser horseshoe bats prefer horizontal bars? I still wonder who asked them.