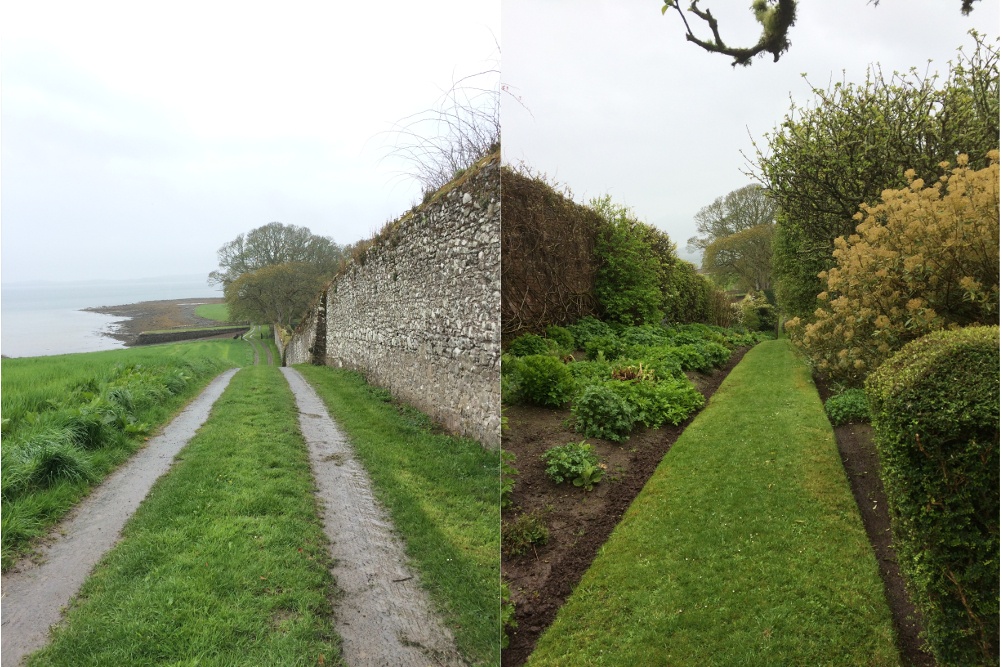 Two sides of a garden wall

I should have paid more attention when people told me about gardens in Northern Ireland. Three days there with the I.D.S was a revelation. The dendrologists of this world are a coterie of warm-hearted enthusiasts, principally focussed on trees, but distracted in a flash by any beautiful or intriguing plant, forest or garden. Heads down, in other words, as often as up or sideways – and always chattering. A friendlier network you couldn’t meet, or one better-informed about gardens and gardeners to visit.

So three days to see the dendrological gardens around Belfast, or more strictly round Strangford Lough, the almost landlocked arm of the sea just north of the city. The best known by far is Mount Stewart, the largely Edwardian playground of the intensely socialite and political Londonderrys. Edith, the marchioness, was famous for her sense of humour, which she embodied in comical statues of animals peopling the walled garden. Perhaps she had in mind the Italian Gardens like Bomarzo adorned with monsters and ogres. Italy had the advantage of artists as designers and skilled stonemasons to cut the figures. Crude caricatures cast in cement long after the laughter has died aren’t quite so persuasive.

It was trees we came to see, though, and the woodlands of Mount Stewart were alone worth the journey. It was high rhodo time, and my ignorance of their provenance and parentage was shameful. Himalayan trees brandishing hundreds of huge flowers: arboreum? sinogrande? macabeanum? Better to stay mum and wonder. It’s probably a hybrid in any case. Neil Porteous, in charge of the gardens for the National Trust, knows it all, and far more than he had time to tell us.

The Gulf Stream obligingly curls round the north coast of Ireland, through the North Channel, where only 13 miles separates it from the Mull of Kintyre, to rush in and out of Strangford Lough with every tide. As a result the shores of the Lough rarely freeze; the whole shallow basin maintains an equable, damp growth-provoking climate all year round. Castlewellan is a name most gardeners know – if only as a yellow variety of the infamous Leyland cypress. The Annesley family started an arboretum here in the 1840s and time has given it a stature it is hard to beat, with champion specimens by the dozen, many them conifers; not all of them beautiful.

We visited Seaforde, where the Forde family have lived for 400 years, in the past century creating a bewilderingly huge and beautiful woodland garden – and now a papillion pavilion, if that’s the word, of tropical butterflies.. Wandering in such museums of forest beauty is hypnotic – and of course deceiving. Nowhere in nature is there anything like the variety, of form and colour, texture and intermingled growth. What you see in a great woodland garden in spring is an invention of the 19thcentury, embellished in the 20th, and perhaps at its very peak in the 21st.

Not that it always takes a century to achieve. Paddy and Julie Mackie started their collection on the completely bare Mahee Island (they had gone there as ornithologists) in the 1960s, and it is already richly mature. Their daughter Tracy Hamilton conducted our visit. The picture above of her walled garden at Ringdufferin sums up the contrast between the windswept shores of the lough and the sanctuary behind garden walls.